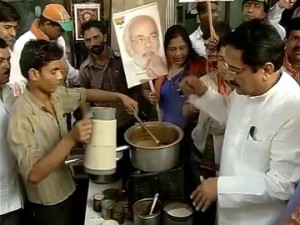 ea vendors in the city are getting VIP passes for Narendra Modi‘s rally in Mumbai. Many have accepted the invitation and plan to shut shop for the day and attend the “Maha Garajna (gigantic roar)” rally.
“Modi made humble beginnings as a ‘chaiwala‘ (tea vendor) at Ahmedabad railway station before plunging into politics. The Congress made fun of him and his modest start in life. He shot back that it was better to sell tea, than sell the nation, so we will have tea vendors as special guests at his mega rally,” BJP leader Raj Purohit said.
He said a special enclosure was being organised at the Bandra-Kurla Complex where the rally will be held, for the tea vendors to listen to the BJP’s prime ministerial candidate speak. Today, Mr Purohit shared a cuppa with the vendors in south Mumbai and posed for pictures.
BJP General Secretary Rajiv Pratap Rudy is in charge of the arrangements and he has reportedly directed partymen that the Mumbai rally must set the standard for public meetings. BJP workers are going all out to ensure attendance – from door-to-door visits to convince people to attend the rally, to using every media platform to advertise it, said Mumbai’s BJP chief Ashish Shelar.
according to NDTV..People who want to attend the rally can call a special number to get a complimentary pick-up. A party worker will return the call, note the caller’s details and will organize the pick-up from a pre-determined point near the person’s residence.Besides Mr Modi, the rally will be addressed by BJP president Rajnath Singh, his predecessor Nitin Gadkari and senior Maharashtra leaders like Gopinath Munde and state party chief Devendra Fadnavis.