LUCKNOW:  Quami Ekta Dal candidate Mukhtar Ansari has withdrawn from the Lok Sabha contest in Varanasi, his brother Afzaal Ansari announced  today .Mukhtar Ansari, who has several cases of murder, extortion and dacoity registered against him, said in a statement distributed by his brother that he would reveal his future strategy on 15 April. 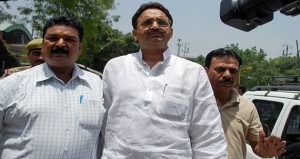 Afzaal Ansari said the decision was taken in the interests of the minority community.Mukhtar Ansari, currently in jail, is a member of the Uttar Pradesh Assembly from Mau. He had earlier said he would take on BJP’s prime ministerial candidate Narendra Modi in the Hindu holy city.Mukhtar Ansari finished second in the 2009 Lok Sabha polls in Varanasi. BJP leader Murli Manohar Joshi scraped through by a few thousand votes as Muslims voted in large numbers for Ansari.
The most prominent candidate pitted against Modi is AAP leader Arvind Kejriwal.  Others in the fray are Kailash Chaurasiya of the Samajwadi Party and Congress legislator Ajay Rai.