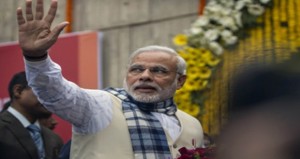 NEW DELHI : BJP’s central election committee is set to meet shortly to finalise Lok Sabha poll candidates for over 150 seats. What is been keenly watched is whether the party will take a final decision on the Uttar Pradesh constituency from where NDA’s prime ministerial candidate Narendra Modi will contest.
The central election committee meeting will be preceded by a meeting of party’s parliamentary board. Senior party leaders LK Advani, Rajnath Singh, Nitin Gadkari, Ananth Kumar, Murli Manohar Joshi and Narendra Modi are among those who have already arrived at the party HQ. While it is widely speculated that Narendra Modi will bow to the pressure from party cadre to contest from the historical city of Varanasi, the voices of opposition, though muted, from supporters of sitting MP Murli Manohar Joshi has complicated the matters.
Indications from within party suggest that Modi will contest from two seats, Varanasi and one constituency in Gujarat. Media reports claimed that Modi supporters have already started to arrive in Varanasi to celebrate the naming of Modi as the candidate from the holiest of India’s cities. If the party decides against fielding Modi from Varanasi then he may be named as the party candidate from the prestigious Lucknow constituency.
Sitting MP from there Lalji Tandon has already made it clear that he is willing to withdraw his claim for renomination if Modi chooses to contest from the capital of Uttar Pradesh. However, what has complicated the matter is party president Rajnath Singh’s wish to switch from his current Ghaziabad seat to Lucknow.
Uttar Pradesh with 80 parliamentary seats is being considered crucial in Modi becoming the next PM of India and BJP coming back to power at the Centre after a decade. In all, the BJP poll panel is likely to finalise names for over 150 Lok Sabha seats, primarily from Bihar, Uttar Pradesh, Rajasthan, Karnataka, Madhya Pradesh, Gujarat and Maharashtra
The party has already declared 106 candidates in various states in two lists released earlier. The upcoming Lok Sabha polls is to be held in April and May, with counting of votes to be done on 16 May.