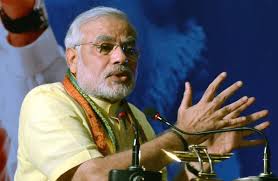 KOLKATA: BJP’s prime ministerial face Narendra Modi set at rest all speculations with a massive rally (which both Modi and Rajnath Singh admitted they never expected) at Brigade here this afternoon and asked from audience all 42 LS seats to convert both “India, Bengal and all Eastern states into land of gold.’’
Greeting his Brigade audience in Bengalee, Modi concluded his long speech with famous words of Netaji: “Subhas Babu said: “You give me blood, I will give you freedom,’’ so I say give me your hand (all 42 LS seats), I will give you swaraj.’’
It wasn’t all, he gave rather a long time in criticizing 35-year rule of CPI(M) and Congress, leaving Mamata Banerjee criticized mildly without naming her saying this “Poribortan (change) you have brought to Bengal (not happening in the state) now should be brought to Delhi…for, people waited for more than 60 years (Congress rule), now it could not be tolerated anymore.’’
If “Bengal showed the way by driving out CPI(M) after 35 years, then show that in Delhi,’’ his proposal was greeted with applause by the big audience!
He didn’t of course confirm the fears of Congress and CPI(M) leaders on Netaji’s mystery but dug up a “grave for Congress and its loyal’’ (now) President Pranab Mukherjee and dropped dangerous hints why he despite his being “most senior Congress leader and minister after Mrs Indira Gandhi assassination wasn’t made Prime Minister, instead he was driven out of the Government under Rajiv Gandhi…it got repeated again when Sonia Gandhi did not become Prime Minister, instead of Mukherjee, she chose Manmohan Singh….And do not forget this, I urge you all in Bengal about the real character of Congress!’’
He stunned all with his political twists at Kolkata rally, like the Left leaning intellectual told this reporter yesterday: “…they are ignoring what if Modi speaks effectively on issues than the size of his rally.’’
Interestingly, while both Rajnath Singh and Narendra Modi criticized CPI(M) and Congress in (Rajnath more) worst possible political terms, but had not mentioned nor criticized Mamata directly. Rather Rajnath backed Mamata’s long pending demand with Congress-led UPA II to announce a moratorium on huge loan repayment with interest annually for development of the State!
Political observers here who were equally stunned by “Modi magic,’’ saw his remaining rather soft on Mamata as “strategic and didn’t want to close an option eliciting support from TMC after polls!’’
However, Mamata wasn’t straight either she merely termed without naming Modi as “communal face of BJP.’’
Flanked by other national and local BJP leaders who criticized Mamata rule in vehement terms, Modi, who came half an hour late at Brigade, didn’t follow their script!
Rather he said: “if you give me your hand, you’ll have three advantages: Didi will work here but ask for a report card of her performances, I will work in Delhi and Pranab-da over my head, and we will all restore back Bengal to its original place when it was Rastra Guru for India!’’
He taunted Third Front leaders, who met in Delhi today as “an effort of all third rated parties who believe in no developments and destruction of economies. They should come with helicopters and see which way the wind is blowing!’’
After quoting Bose, he ended his speech quoting Rabindranth Tagore who asked Indian leaders to create a nation where “Mind is free and head is held high.’’