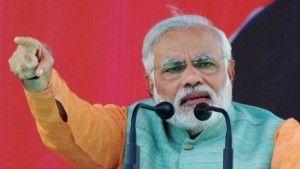 NEW DELHI : With Delhi Assembly Elections in hindsight, Prime Minister Narendra Modi has sought a written reply from Bharatiya Janata Party leaders, who are yet to hit the campaign trail in the national capital, reports said on Tuesday.
Modi, known to be a tough taskmaster, had reportedly earlier asked the party leaders to aggressively campaign for the Delhi Assembly polls.
Modi knows that the national capital is different from other states where the BJP has significantly done well as the fight was against the Congress. In Delhi, Arvind Kejriwal-led Aam Aadmi Party is BJP’s main opponent and has a large support base.
In 2013 Delhi polls, the BJP had won 31 Assembly seats, AAP 28 and Congress 8.Modi’s reaction came after BJP leaders failed to achieve the target of holding 2,700 public meetings across the city.
Reports say that in a meeting held between party president Amit Shah, Delhi BJP leaders and office bearers in November, it was decided that all the party parliamentarians would hold 2,700 public meetings across the city.However, a month later, that figure has been reduced to around 1,400, the source said.
The BJP has set a target of winning 60 seats in Delhi.
Meanwhile, miffed with infighting and lack of coordination among state leaders that may harm the party’s prospects in the upcoming Delhi Assembly polls, the BJP president has decided to take charge of the election machinery in the capital from December 25, a top source said.
Delhi has been under President’s rule since February after the Arvind Kejriwal-led AAP government stepped down after 49 days in office.