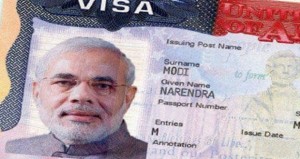 WASHINGTON: Even as a visiting US official indicated the country’s willingness to work with India’s new leader post elections whoever it may be, Washington insisted there is no change in its visa policy in respect of Narendra Modi.
Bhartiya Janata Party’s prime ministerial candidate was “welcome to apply for a visa, and obviously that would be considered through the normal process”, State Department spokesperson Jen Psaki told reporters on Friday repeating an old formulation. ”We don’t speculate on visas, of course, and our position hasn’t changed on this case,” she said when asked to clarify remarks made by US Assistant Secretary of State Nisha Biswal to a TV channel in response to a specific question about Modi.
“I would just say that the United States has welcomed every leader of this vibrant democracy, and that a democratically elected leader of India will be a welcome partner,” Biswal was quoted as saying when asked if Modi would be granted a US visa if he becomes prime minister. But Psaki said “I think she was just reflecting the strength of our relationship with India” and it was “correct” to say that she did not mean to suggest that the Gujarat chief minister would indeed get a visa as it has been taken by some.
“Obviously, the elections haven’t taken place at this point, but our position hasn’t changed on this, which is that Mr. Modi is welcome to apply for a visa, and obviously that would be considered through the normal process,” she said. But as to whether Modi would get a visa if he applies, the spokesperson said: “We wouldn’t make a sweeping prediction for anyone, given visas are confidential.”
“There are some, perhaps, that may be easier than others,” she added. The US State Department revoked Modi’s visa in 2005 over his alleged role or inaction during the 2002 Gujarat riots in which at least 1,000 people, most of them Muslims, were killed. Modi, who denies any wrong doing, has not applied for a new visa after that.
US officials have also shunned him since then. But indicating a major change of policy, US ambassador to India Nancy Powell met Modi at his residence in Gandhinagar last month. But Washington has sought to portray it as a normal exchange of views with various party leaders before the April-May elections as it does not want to be seen taking sides in the coming elections.
Another indication of US change in policy was the omission of Modi’s name from the State Department’s annual human rights report. US has glossed over that too suggesting that the report essentially focuses on the previous year. Asked if Biswal had talked about human rights with Indian officials given that the report mentioned rampant corruption as a major problem, Psaki said she didn’t “have any more details on her trip” but “Obviously, we raise human rights issues whenever we can in a range of countries”.