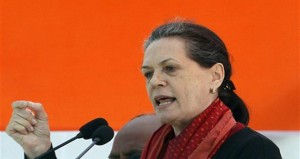 “The way, 23 years after Rajiv Gandhi’s martyrdom, Narendra Modi has criticised him, if we don’t call it petty, then what else should we call it?” the former prime minister’s widow said.She said Modi was indulging in “neech rajnitik soch aur batein” (low political thinking and words). Modi, at a rally in Amethi on 5 May, had said that Rajiv Gandhi, then a Congress general secretary, had insulted the then Andhra Pradesh chief minister T. Anjaiah at Hyderabad airport in 1982.
Sonia Gandhi’s daughter Priyanka Gandhi Vadra too had accused Modi of “insulting” her father and said he was indulging in “low-level politics”. To this, Modi had said that she was attacking him over his caste.