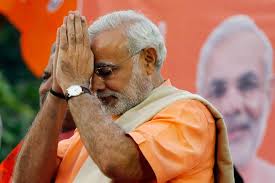 KOLKATA: As BJP leader and party’s prime ministerial candidate Narendra Modi’s Brigade Ground rally here tomorrow opened here a floodgate of speculation among major non-BJP political parties, they are keeping a close watch on the prospect of size of gathering which Modi might attract in Brigade and his Bengal’s success story.
“We aren’t just worried, but of course with his recent records of successes at rallies in electorally important Indian cities, will keep us speculative about the dent he may make in Bengal where his party has never been strong,’’ admitted a senior Pradesh Congress leader.
What worries both Congress and CPI(M) that Modi might reopen an old theme: “Congress and Left virtually having done nothing to reveal the mystery shrouding Netaji Subhas Chandra Bose’s disappreance from `mythical death and air crash story in Taiwan in 1945 on August 18.’’
Though it may not appeal to all changed present generation of Bengalees perse, but raised in Kolkata, the issue would threaten to rub salt on Congress and Left at the national level.
“Well, we do not know if Modi will reopen the issue, but he might with other Bengal-related issues,’’ said a senior state BJP leader, equally worried, for different reasons, about the size of the gathering.
Meanwhile, nor TMC’s top brass is untouched by the fever of speculation either. Mamata Banerjee’s recent refusal to a RTI about State Government held up 64 secret documents on Netaji had only given “Mamata profile an old Congress touch began by Nehru and carried out by his dynasty.’’
“But we surely want to see the number of minorities and others who gather at his rally and prospect of his raising the voting percentage for BJP in West Bengal which has always been weak,’’ added a senior TMC leader.
“After all if Modi and BJP can take a sizeable voters from us he would give a handle to lost out the CPI(M) and Congress in LS polls,’’ he said, adding, “of course, if he by any chance put us in same bracket with the Congress and Left on Netaji issue it would be a big embarrassment for us nationally.’’
Though state BJP leaders have no definite signal if Modi would re-open the Netaji issue, “but Modi known for his political acumen, leaves all political establishments worried,’’ said a political observer in the Left camp.
“Dreams don’t often succeed, but Bengal political parties are ignoring the fact that if Modi speaks effectively well on relevant issues, it would have more effect on electorates than the rally size, they are worried about,’’ said a Left leaning intellectual.