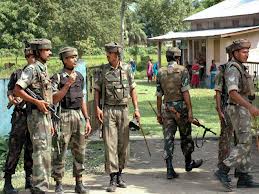 Five people were killed and three others were critically injured along National Highway 31 in lower Assam’s Kokrajhar district on Friday night when militants from the National Democratic Front of Bodoland (NDFB) fired indiscriminately at passengers of a bus proceeding from Siliguri in West Bengal to Meghalaya’s capital Shillong.
“The group behind the attack has been identified as National Democratic Front of Bodoland. We have also identified the main perpetrator behind the attack. A massive search operation has already been launched,” AP Raut, Additional Director General, Law and Order, Assam Police  told Reporters today.
According to the Assam Police, the militants stopped the bus at around 9:30 pm, asked eight passengers to get down and opened fire indiscriminately, killing six of them on the spot. The police said that the militants were carried sophisticated guns. The injured were rushed to Bongaigaon Civil Hospital.