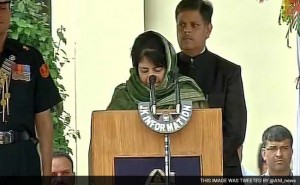 SRINAGAR: Mehbooba Mufti of the People’s Democratic Party or PDP took oath this morning as the first woman Chief Minister of the country’s only Muslim majority state, Jammu and Kashmir.
The 56-year-old succeeds her father Mufti Mohammad Saeed who died in January this year.
There is trouble already for Ms Mufti, with senior PDP leader and lawmaker Tariq Karra boycotting the ceremony. Mr Karra, said sources, has serious differences over Mehbooba Mufti’s selection of ministers for the new cabinet.
Ms Mufti has reportedly dropped three party leaders who were senior ministers in her father Mufti Mohammad Saeed’s team. Among those who will take oath today are also members of her party’s ally in the state, the BJP.
Mehbooba Mufti delayed forming government in Jammu and Kashmir for three months after her father and chief minister Mufti Saeed’s death in January this year, as she attempted to renegotiate the terms of her party’s partnership with the BJP, which also rules at the Centre.
The delay caused considerable restlessness among lawmakers of her party, who were pushing for early government formation. Last week, after a long stalemate, Ms Mufti’s meeting Prime Minister Narendra Modi cleared the way for a PDP-BJP government to take oath. But her struggle to manage a difficult coalition remains.
Former J&K chief minister and Ms Mufti’s main rival Omar Abdullah has prophesied that Mehbooba will face “more alliance contradictions” in the partnership with the BJP, an ideological opposite.
Mehbooba Mufti, Mr Abdullah said, is a “CM by inheritance, not because she is a woman,” and alleged that none of her conditions for government formation were fulfilled by the BJP, adding, “I don’t know what last three months were for?”

Ms Mufti has invited Mr Abdullah and his father Farooq Abdullah for her oath ceremony today; Omar Abdullah has said he is looking forward to attend.