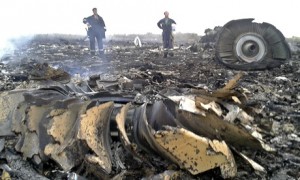 UKRAINE: A Malaysia Airlines passenger jet carrying 295 people from Amsterdam to Kuala Lumpur has crashed in an area of eastern Ukraine where separatist rebels have been engaging Ukrainian military forces in recent weeks.Ukraine’s president, Petro Poroshenko, said the jet may have been shot down.”We do not exclude that the plane was shot down and confirm that the Ukraine armed forces did not fire at any targets in the sky,” Poroshenko said in a statement.
Dozens of bodies were scattered around the smouldering wreckage of the plane, near the village of Grabovo, about 25 miles from the Russian border, according to reporters at the scene.Emergency workers said at least 100 bodies had been found so far, and wreckage was scattered across an area 9 miles in diameter.Emergency workers at the crash site. Photograph: Maxim Zmeyev/Reuters
“I was working in the field on my tractor when I heard the sound of a plane and then a bang and shots. Then I saw the plane hit the ground and break in two. There was thick black smoke,” a witness, who gave his name only as Vladimir, told Reuters.In a statement, Malaysia Airlines said Ukraine’s air traffic control lost contact with flight MH17 at 1415 (GMT) , approximately 50km from the Russia-Ukraine border.
“Flight MH17 operated on a Boeing 777 departed Amsterdam at 12.15pm (Amsterdam time) and was estimated to arrive at Kuala Lumpur International Airport at 6.10am (Malaysia time) the next day. The flight was carrying 280 passengers and 15 crew onboard.” The flight also had a Dutch airline flight number from KLM, KL4103.
Anton Gerashchenko, an adviser to Ukraine’s interior minister, wrote on his Facebook page that the plane had crashed in Ukrainian territory after being hit by a missile fired from a Buk launcher. Associated Press said one of its journalists had seen a similar launcher near the town of Snizhne earlier on Thursday.Leaders of the self-declared Donetsk people’s republic denied any involvement, according to Interfax news agency. A member of the republic’s security council said rebel weapons only had the capacity to shoot down a plane at 3,000 metres and blamed Ukrainian military forces for the attack.
Poroshenko called for a commission to be set up to investigate the crash. “This is the third tragic incident in recent days after Ukrainian military An-26 and Su-25 jets were shot down from Russian territory. We don’t rule out that this plane was also shot down, and we stress that the Ukrainian military didn’t take any actions to destroy targets in the air,” he said.
In recent days the Ukrainian air force has lost planes in the area after they have been shot down by rebels. Earlier on Thursday, Ukraine accused Russia of downing one of its fighter jets inside Ukrainian territory. Russia’s ambassador to the UN, Vitaly Churkin, rejected the allegation, telling reporters: “We didn’t do it.”The White House spokesman Josh Earnest said President Barack Obama had told his team to stay in close touch with senior Ukrainian officials. “We’re aware of reports of a downed passenger jet near the Russian-Ukraine border. The president has been briefed on these reports,” Earnest said.

Local Ukrainian TV images show smoke from the Malaysia passenger airliner that has crashed near the Russian border. Photograph: Universal News And Sport (Europe) Earlier, Obama and the Russian president, Vladimir Putin, spoke on the phone about new US sanctions imposed on Moscow over its alleged failure to halt the flow of weapons and fighters to separatist forces in eastern Ukraine.The White House did not say whether the call occurred before or after reports of the crash emerged. However the Kremlin said Putin informed the US president of the reports on the call.
Several airlines, including British Airways, Aeroflot, Turkish Airlines and Russia’s Transaereo announced they would avoid Ukrainian airspace with immediate effect. Lufthansa said it would steer clear of airspace over eastern Ukraine.At least 30 Dutch-speaking passengers were on the plane, according to two travel agencies which sold tickets for the flight. According to Dutch newspaper websites, several Dutch passports were found near the scene of the crash.
The Malaysian prime minister, Najib Razak, said via Twitter: “I am shocked by reports that an MH plane crashed. We are launching an immediate investigation.”
The country’s defence minister tweeted that he was “monitoring closely” claims that MH17 had crashed, saying: “No comfirmation [sic] it was shot down! Our military have been instructed 2 get on it!”The crash comes four months after Malaysia Airlines flight MH370 vanished on a flight from Kuala Lumpur to Beijing with 239 people on board, two-thirds of them Chinese citizens. It has yet to be found despite a massive international search, which is still ongoing, but Malaysia Airlines has said it believes everyone on board died when the plane crashed into the southern Indian Ocean.
The cause of MH370’s disappearance remains a mystery, with investigators suggesting the plane was deliberately diverted from its course, but there was no way of knowing whether the pilots were responding to an emergency or whether there was malicious intent.That aircraft was a Boeing-777 – the same kind of plane as flight MH17.