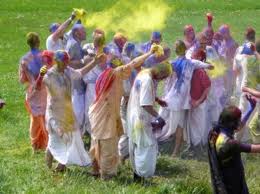 KOLKATA:  Going back five- and half-decade back, this Holi! And a group of devotees of Lord Krishna Chaitanya this year have decided to rerun 54-year back tradition with a spiritual elan tomorrow.
In 1960s Calcutta used to celebrate Doljatra (Holi), also celebrating the birth anniversaries of Sree Sree Krishna Chaitanya, one of the Indian Prophets, (born in 1500 th century), with colour and Hari Sankeertan (chanting of name of Lord Hari),
“Ironically, the present generation of Bengalees do not remember those days, and for Bengalees of older generation it has already passed into a faint memory,’’ said a Maharaj of Gourio Math of Kolkata.
Maharaj’s assessment isn’t untrue! With radical political changes, including renewed Communist movement and senseless Naxalite released violence taking over since 1960s in Bengal, including emergence of new Bangladesh, there isn’t more any footfall of that great event, which used to bring all under a single celebration.
Though Gourio Math Sanyasis wouldn’t comment on the Bengalee politicians contributions engineering the change in Bengalee mind-set, “scripting end to such celebrations was essentially political,’’ felt a sociologist of Calcutta University.
“But then since `60s, growing trend of Bengalees losing out economically (due to flight of industries from the State) and finally Bengalees migrating out of city also contributed to Calcuttans forgetting Lord Krishna Chaitanya’s birth anniversaries with colour and Prophet’s message of universal love, peace and classless brotherhood for humanity,’’ he added.
Even the last census report also supports sociologist’s thesis of flight of Bengalees from Kolkata having gained momentum and barring present Kolkata’s north, hardly there’s any major size of Bengalee population to be found!.
“But we decided this year to go back 54 years back this Holi and see the people’s response,’’ said a senior Maharaj of Math.
Yet chances of success isn’t an easy task either for devotees or for a changed generation of Bengalees who are more used to advertisement-oriented culture gripping the affluent middle-class of India fast.