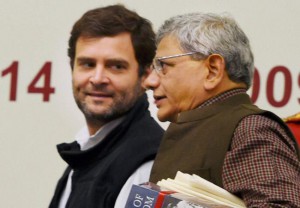 NEW DELHI: / KOLKATA: It was meeting between Rahul and Pradesh leaders on the issue of “poll tie up with CPI(M)-dominate Left Front and Congress’’ in next assembly polls in West Bengal.
And as expected at the end refused to throw up surprise, though a top Pradesh leader told this writer, “though 15 delegates saw no other way than a tie up with Left during the Tuglug Road meeting.’’
Incidentally, the top left leaders, including Buddhadeb Bhattacharjee, Surya Kant Mishra, a fortnight back gave an open call to Congress, party high command to respond to their public gesture asking State Congress leaders to join anti-Mamata Banerjee poll flank in next assembly elections.
But they got no response!The Left party sources said: “we see Congress leadership is hesitating, but election isn’t far away>’’
Importantly, Rahul at the end of the talk may have backed 15 senior party delegates and ignoring remaining two opposing it, gave no deadline for a decision.
A political observer said while most of the party got stuck by same crisis – lack of face to face Mamata Banerjee effectively during the polls, “and though they know well Banerjee’s popularity is on the wane. But with a vacuum like this Banerjee feels confident about the outcome.’’
“For Congress stakes are even higher, once they strike a deal in Bengal, they fear it would be spreading its wings in Delhi, “where left isn’t anymore fashionable to talk about with Congress under Manmohan Singh were more friendly to economic reforms which actually scripted doom for Left.
“Even in West Bengal Left is discarded, they have some sympathies by tortured people by Mamata’s party, it doesn’t through up any clear possibilities. Prradesh Congress with two to ten seats, can wait, but not Congress agendas at national level. And Mamata may have the last lough!