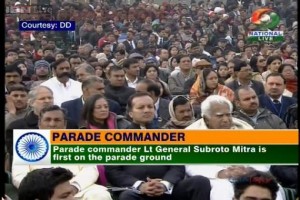 NEW DELHI : Delhi Chief Minister Arvind Kejriwal who threatened to disrupt the Republic Day celebrations a few days ago was seen attending it at Rajghat in the national capital.
The Kejriwal government was protesting against the Centre, Delhi Police on January 21 and 22 in the heart of the national capital demanding the suspension of policemen who defied the orders of his minister Somnath Bharti. They also demanded to bring the police under the Delhi government.
Kejriwal threatened to undertake an indefinite protest and gather lakhs of people at Rajpath on Republic Day. The protest bought the city to a standstill with hundreds of people joining it.
The Chief Minister even slept on the road outside the Rail Bhawan and gave up his protest after Lieutenant Governor Najeeb Jung sent the policemen on leave.