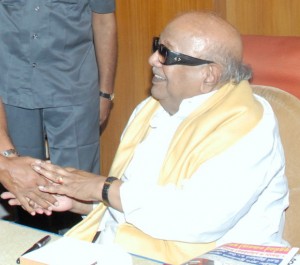 CHENNAI/NEW DELHI: After ruling out an alliance with the Congress for the 2014 Lok Sabha electionsand indicating that a pre-poll tie-up with the BJP was remote, DMK chief M Karunanidhi praised BJP’s PM candidate Narendra Modi, describing him as “a good person”.

In an exclusive interview to TOI on Thursday, the DMK leader, when asked about Modi, said, “My personal opinion is Modi is a good person and has taken much care about the development of his state. He has proved his capabilities as an administrator in Gujarat where the people have elected him repeatedly. But whether he is fit to rule the nation, it has to be decided by the voters.”

Karunanidhi’s praise of Modi comes as a surprise to the Congress, though the Left parties said this was expected. The BJP appreciated his comment, but saw aligning with the Dravidian party as a non-starter considering it aims to continue attacking UPA-II on corruption which includes the 2G Spectrum scam in which two DMK leaders were in jail.

Congress saw Karunanidhi’s endorsement of Modi as a sign of desperation. Party spokesman Meem Afzal said, “It’s the pressure of Tamil Nadu politics that has made him give this kind of statement.”

CPM general secretary Prakash Karat said, “I am not surprised.” D Raja, a member of Rajya Sabha from Tamil Nadu, said, “Karunanidhi should be asked what he means by a ‘good person’. He also said the DMK strongman’s endorsement of Modi shows the depth to which he has fallen. “It’s the same party that passed a resolution in the name of Dravidian movement,” Raja said.

For BJP, Karunanidhi’s praise of Modi comes as a bonus from a state where the ruling AIADMK is viewed as a better ally, given chief minister J Jayalalitha’s cordial relations with Modi. Party spokesman Prakash Javdekar said, “Since the time the Congress has been attacking Modi, sometimes below the belt, more and more parties and leaders from across the country are appreciating Modi for his leadership qualities and good governance.”