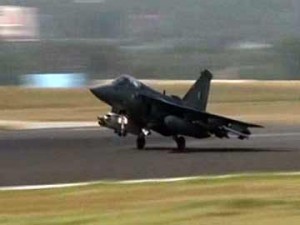 New Delhi : The indigenously built Light Combat Aircraft (LCA) Tejas got its second Initial Operation Clearance today in Bangalore at an event attended by Defence Minister A K Antony.For the next 12 to 15 months, the Air Force will integrate the new aircraft into the force. Tejas is expected to be battle ready by the end of 2015.
The Aeronautical Development Agency (ADA) of Hindustan Aeronautics Limited (HAL), in the interregnum, will work on mid-air refueling and enabling the aircraft to carry long range beyond visual range missiles. Tejas is a light weight, single engine, single seat, supersonic and multirole, combat aircraft.It has been in the making for almost three decades and has seen several delays and huge cost over-runs.
Tejas will be replacing the aging MiG-21 Russian made fighter aircraft and play a key role in air defence in the form of an interceptor.As of now, Tejas is capable of carrying missiles with a limited range and bombs.
According to estimates, India has spent over Rs. 25,000 crore to develop the aircraft. But despite the delay and extraordinarily large amount of money spent, Indian scientists still haven’t been able to develop an engine powerful enough to fly the aircraft. The Kaveri engine developed for Tejas failed to make the mark.

The first 20 Tejas will be powered by the American GE-404 engines; the next six Mark-II squadrons (16-18 jets in each) will have the more powerful GE F-414 engines. India will be buying 99 GE-414 engines from GE at a cost of $822-million.
Despite the delays and cost overruns, the Initial Operational Clearance for the Tejas and its induction into the Air Force is an important milestone of for India and the country’s endeavour to indigenously produce military equipment and reduce its dependence on foreign manufacturers.Report. NDTV.