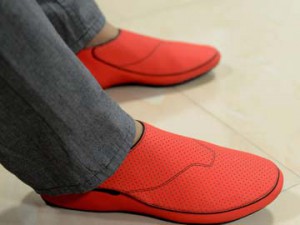 NEW DELHI : “Wizard of Oz” heroine Dorothy only had to click her ruby red slippers together and they would spirit her home to Kansas.Now, an Indian high-tech start-up is promising to do the same in real life with a new, GPS-enabled smart sports shoe that vibrates to give the wearer directions.
The fiery red sneakers, which will also count the number of steps taken, distance travelled and calories burned, will go on sale in September under the name LeChal, which means “take me along” in Hindi.The shoes come with a detachable Bluetooth transceiver that links to a smartphone app to direct the wearer using Google maps, sending a vibrating signal to indicate a left or right turn.
They are the brainchild of 30-year-old Krispian Lawrence and Anirudh Sharma, 28, two engineering graduates who founded their tech start-up Ducere in a small apartment in 2011 with backing from angel investors and now employ 50 people. “We got this idea and realised that it would really help visually challenged people, it would work without any audio or physical distractions,” said Lawrence in an interview with AFP.
“But then we were trying it out on ourselves and suddenly we were like, ‘wait a minute, even I would want this,’ because it felt so liberating not having to look down at your phone or being tied to anything.””The footwear works instinctively. Imagine if someone taps your right shoulder, your body naturally reacts to turn right, and that’s how LeChal works.”
GROWING SECTOR
Smart shoes aimed at specific demographic markets — such as dementia sufferers and children whose parents want to keep track of their movements — are already commercially available.But Lawrence and Sharma believe theirs will be the first to target mass-market consumers, and have focused on creating stylish rather than purely functional footwear.As well as the red sneaker, they are marketing an insole to allow users to slip the technology into their own shoes.
“Earlier, wearable technology was always seen as machine-like, nerdy glasses or watches, but now that is changing,” said Lawrence.They say they have 25,000 advance orders for the shoes, which will retail at between $100 and $150. Demand has so far mostly been through word of mouth and through the lechal.com website. But the company is in talks with retailers to stock the shoes ahead of the holiday season in India and the United States.
It forecasts it will sell more than 100,000 pairs of the shoes, which are manufactured in China, by next April.Wearable technology is a growing global sector. Market tracker IDC forecast in April that sales would triple this year to 19 million units worldwide, growing to 111.9 million by 2018.The industry’s rapid growth has given rise to fears about privacy, although Ducere says it will record no data on users and maintains robust security.
The company still hopes its product will be useful for visually impaired people, and experts at the L.V. Prasad Eye Institute in the southern city of Hyderabad are testing its suitability.”It’s a perfect intuitive wearable item. You may forget to wear a belt or a helmet, but shoes you can never leave the house without,” said Anthony Vipin Das, a doctor at the institute.”LeChal solves orientation and direction problems, it’s a good assistant to the cane.”
Possible problems include battery failure or loss of Bluetooth connectivity, which Das says could be fixed by providing a live feed of a user’s position to a friend or relative, with their consent.The company says it could use a portion of any future profits to subsidise the shoes for disabled users.For all the shoes’ high-tech features, Lawrence’s favourite thing is that he no longer loses his phone — if the wearer moves too far from his or her phone, the shoes buzz to warn them.
“I’m a very forgetful person and the best part is that the shoes don’t let you forget your phone,” he said.