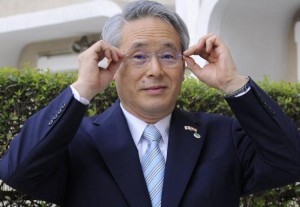 NEW DELHI, DEC. 16:
By 2015-16, the company expects its overseas revenue to touch 50 per cent from 41 per cent now. Of this, India will contribute 3 per cent. Junzo Nakajima, Executive Vice-President and CEO for Asia Pacific, spoke toBusiness Line about the mid-term management plan. Excerpts:
In India, which are the areas Hitachi is looking at to achieve the growth target?

Hitachi is accelerating its global business expansion employing India as a base, reaching out to Africa, West Asia and ASEAN.
How does it translate into revenues?

Where are you making these investments?

We have been looking at mergers and acquisitions. For example, Hitachi has recently (November 2013) concluded an agreement to acquire Prizm Payment Services, a provider of payment services using ATMs and point-of-sale systems to banks and financial institutions.

Also, Hitachi is strengthening its R&D in fields like construction machinery. At the same time, we are expanding our base of operations such as with the expansion of manufacturing and sales of power electronic products and the start up of a new automotive powder metallurgy and friction materials plant.

Are you looking at more acquisitions here?

Yes, we would like to do more acquisitions like that of Prizm. If you look at the information technology space, in 2011 we acquired Hyderabad-based Sierra Atlantic, which is now called Hitachi Consulting Software Services India Ltd.

India has witnessed economic slowdown. Capital goods manufacturers are seeing delayed order and default in payments. How do you cope?

The slowdown is bottoming out, and the need for sophisticated infrastructure is still high. After the general election scheduled for coming spring, expansion and acceleration of investments in infrastructure are expected. For Hitachi, India offers not only a market with immense business opportunities, but also a large pool of talented human resources. And, Hitachi will accelerate its global business expansion employing India as base.

Who are your competitors in the Indian market?

In construction machinery there are L&T, Komatsu and Kobelco. In generation systems there are MHI, Toshiba and JSW, while for air-conditioners its Voltas, Samsung and LG; and Bombardier and Siemens in rail.

What are your targets in the transport sector?

The dedicated freight corridor between Delhi and Mumbai is yet to come. Entire project launch is being delayed. According to the latest information, the project will come up for bidding in January and it is funded by Japan. Hitachi would like to engage in signalling.

We are seriously looking at the metros and the mono rails. For the mono rail, one of the largest interests for Hitachi is Delhi. We are having a series of talks with the government and DMRC for the feasibility of mono rail.

In many bulk tenders such as power equipment, the government proposes to have locally-made gear. How do you qualify for this clause?

We have two joint ventures, one for steam boilers and another for turbines, located in Chennai. One of our key strategies is to employ local talent by increasing localisation. To increase our sales, it is necessary to localise the products. We have a partnership with the Tatas for construction machinery. And we would look for more partnerships.

What are you doing in the solar industry?

We are making photo voltaic solar inverters in Ahmedabad. We will keep expanding the designing capability in that factory.

Are you keen on the nuclear sector?

We are looking for opportunities in nuclear power plants. But, as you know, it has to be within the framework of the Japan-India agreement in regards to the nuclear treaty.