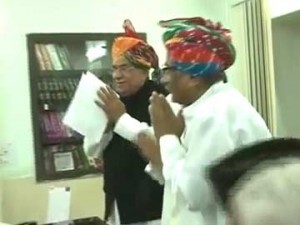 BARMER: The BJP’s brand new import, Colonel (Retd.) Sona Ram Choudhary, has filed his nomination papers as the party’s candidate in Barmer today. The BJP giving Col Choudhary the ticket had sparked senior leader Jaswant Singh’s  rebellion. Mr Singh filed his papers as an independent candidate yesterday, after his party of three decades rejected him.
Col Choudhary quit the Congress days ago; Ms Raje, who recently handed the BJP a clean sweep of Rajasthan in state elections, has reportedly pitched Col Choudhury, a jat leader, as the candidate more likely to win.  Mr Singh’s supporters say it’s preposterous for a newcomer to be rewarded at the cost of a veteran. The former union minister has said it is an insult that the BJP suggested it could “adjust” him elsewhere.
Yesterday, he also joined the club of detractors who accuse Narendra modi, the BJP’s prime ministerial candidate of hubris and the BJP of making him the sole selling point of its campaign.”NaMo NaMo is a chant for God, not humans… NaMo chant diminishes God by treating human beings as Gods,” Mr Singh told NDTV, referring to the moniker used for Mr Modi.
Mr Singh also claimed that he had been expelled by party president Rajnath Singh on the phone for a second time, a charge the BJP has not yet confirmed.He said that the party had earlier dialed in his eviction in 2009 over the allegation that his book cheer-leaded Mohd Ali Jinnah, the founder of Pakistan. He was re-inducted 10 months later at the urging of senior leader LK Advani. “Shouldn’t have returned to the BJP after first-time expulsion,” he said.
Though Mr Singh won the last national election from Darjeeling in West Bengal, he said he wanted to fight too contest this election, likely to be his last, from Barmer because he was born here.