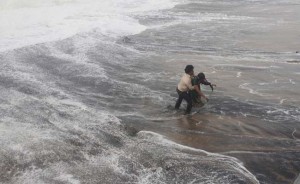 HYDERABAD: Cyclone Hudhud has reportedly killed at least six people in Andhra Pradesh and Odisha and left Visakhapatnam battered, knocking down electricity and telephone poles, damaging buildings and uprooting trees with winds gusting at almost 200 km per hour on Sunday.
Heavy rain is expected in Odisha, Jharkhand, Bihar and parts of Madhya Pradesh and West Bengal.Cyclone Hudhud has lost speed and weakened since last night and now turned into a ‘deep depression’, say weather experts. Chief Minister Chandrababu Naidu told Reporters that phone lines are down and cellphone towers have been damaged, making it tough to assess the scale of devastation.
Mr Naidu has urged Prime Minister Narendra Modi to declare the cyclone a national calamity and has asked for a central relief package of Rs. 2,000 crore.The cyclone hit the port city of Visakhapatnam, home to a large naval base, at 11 am on Sunday with winds peaking at nearly 195 km per hour.
Five people were killed as walls and roofs collapsed.The communication lines have collapsed in the region and the Visakhapatnam airport has been badly damaged.The focus in Andhra Pradesh is now on relief efforts and damage assessment. In the worst-hit cities, including Visakhapatnam, essential commodities like milk and fuel are short. Nearly four lakh people had been evacuated in Andhra Pradesh and Odisha hours before the cyclone hit the coasts.Odisha was largely saved from the cyclone’s wrath.
One person died on Sunday but two had died the day before, during evacuation operations. The government says the main worry is flooding due to rain.The Prime Minister has cancelled his Tuesday’s trip to Varanasi because of heavy rains in eastern Uttar Pradesh following the cyclone.
The Indian Ocean is a cyclone hot spot. Of the 35 deadliest storms in recorded history, 27 have come through the Bay of Bengal – and have landed in either India or Bangladesh.