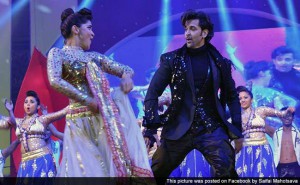 SAIFAI(U P) :Hrithik Roshan danced and also sang. Parineeti Chopra and Jacqueline Fernandez added more stardust. But this year’s edition of the annual extravaganza in Saifai, home town of Uttar Pradesh’s first family, was a low-key affair compared to previous years.
That did not interfere with the enthusiasm of the boisterous crowd that at one point engaged in scuffles over seating for popular Bollywood singer Arijit Singh’s performance. People threw chairs around and the police had to use batons or lathis to bring the crowd under control.
For those who could not grab a seat inside the giant tent put up for the Bollywood performances on Thursday night, there were screens outside.Premium seating inside the tent was reserved for Chief Minister Akhilesh Yadav, his father Mulayam Singh Yadav who heads the Samajwadi Party and his wife and lawmaker Dimple Yadav.
The Saifai Mahotsav is a Yadav event all the way and this year it was organised by Mainpuri MP Tej Pratap Yadav and Badaun MP Dharmendra Yadav, one a grand-nephew and the other a nephew of Mulayam Singh.
The Saifai show has in the past hosted actors like Salman Khan and Madhuri Dixit. This year, Hrithik was the only Bollywood A-lister. Apart from Parineeti and Jacqueline, Huma Qureshi and Richa Chadda also performed.
The festival was started by another Mulayam Singh nephew Ranveer Yadav who was the party block leader in Saifai. After his death in 2002, the Samajwadi Party decided to continue the festival in his memory.
The Yadavs faced much criticism for last year’s Saifai Mahotsav held soon after the riots in Muzaffarnagar that killed 38 people. UP was then still grappling with a huge humanitarian crisis as riot victims in ill-equipped refugee camps took ill in the harsh winter, but the Yadavs had defended the decision to go ahead with the fest.
“The media should apologise to me, to Netaji (Mulayam Singh) for their reports on Saifai,” Akhilesh Yadav had said last year, describing the Saifai Mahotsav as a part of the plan to boost tourism in the state. He claimed that only about Rs. 1 crore had been spent on the festival last year.
This year, Mulayam Singh said villagers too have a right to enjoy Bollywood performances.