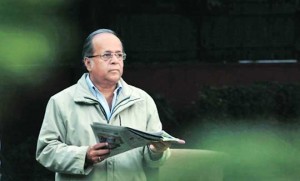 New Delhi :’Is this how you would treat your daughter, My Lord?’ The Additional Solicitor General asks as she shares what the law intern who has accused ex-SC judge A K Ganguly of sexual harassment told a court panel

Following the allegations of sexual harassment against a retired judge of the Supreme Court of India, the Attorney General filed a petition on the same day asking for an investigation into the matter. When the matter was mentioned at 2 pm, the Chief Justice announced that he had set up a committee in his administrative capacity, of three judges, two being incumbent chief justices and a woman judge, to investigate and give a report to the Chief Justice.

The intern gave her statement to the committee, provided the affidavits of witnesses to whom she spoke immediately after the incident, gave all the mobile phone numbers of witnesses and of Justice Ganguly, and stood by her statement. Justice Ganguly was also called and his statement was video recorded. Apart from denying the allegations, he said the new law of 2013 making sexual harassment an offence did not apply to him as the alleged incident was of 2012, forgetting that outraging the modesty of a woman was always an offence, a law under which K P S Gill was prosecuted successfully by Rupan Deol Bajaj.

When the judge was named as A K Ganguly, it was clear that the alleged offence occurred during his tenure as chairman of the West Bengal Human Rights Commission, a post he continues to occupy. Justice Ganguly decided to brazen it out — he announced that he was “shocked and shattered by the allegations”, that the victim was “like his child”, and that “she was in Delhi and she came on her own”.

Justice Ganguly continues to hide behind the presumption of innocence and to get vocal support from powerful members of the judicial and legal fraternity since the details of the incident are not in the public domain. It is in these circumstances that I am compelled to make public the details of the incident as outlined in the victim’s sworn affidavit before the Supreme Court committee, which the three-judge committee found prime facie to be established.

I would like to ask Justice Ganguly if this is indeed how he would like his child to be treated?

Excerpts from the victims’s affidavit are in quotes:

He offered her his bedroom to drink wine and relax

“When I reached the suite, there were two other persons apart from the judge present there. I was told by the judge that the man was associated with the AIFF (All India Football Federation). The woman was a stenographer. The judge then informed me that the AIFF report had to be submitted the next morning, and asked me to stay at the hotel and work all night. I declined and told him that I had to finish the work quickly, and return to the PG accommodation.

“However, he ignored my repeated protests and asked the AIFF man to enquire whether a room could be booked for me at the same hotel. The AIFF man said that this may not be possible, but upon the insistence of the judge, agreed to consult his superior on the matter. Thereafter, the AIFF man and the woman stenographer left the suite.

“I told the judge that the internet was not working. I asked the judge whether I was at all needed as there was no internet connection, and hence I could not do any web-based research.

“At this point, the judge apologised for spoiling my Christmas Eve, and asked me if it was customary in Christian families to drink wine during Christmas. I mumbled yes. He then took out a bottle of red wine, which he said was compliments of the hotel. He also said that since I had had a long day, I should go into his bedroom and relax while drinking some wine.”

Is this how you would like your child to relax, My Lord?

“I felt uneasy, unsettled and disturbed by this suggestion of the judge, and told him that all I wanted to do was to complete the work as soon as possible and return to my PG at the earliest. He, however, brought out a bottle of red wine and handed me a glass. Feeling awkward and unsure, I accepted. This kind of interaction with the judge had never taken place in Kolkata during the period that we worked as RAs (research assistants) with the judge for six months. By now, I was beginning to feel extremely uncomfortable and wanted to leave the place as soon as possible. The judge persisted in making small talk, but I concentrated on completing the typing. I also asked him to arrange transport for me to return to my PG as I wanted to leave at the earliest.

During this time, the judge was making some calls, asking for a room to be booked in the same hotel for me. Even as he was making these calls, I categorically refused to stay in a room in the hotel, and insisted that I needed to return to my PG accommodation.

However, the judge did not remove his hand from my back, and then moved forward to embrace me. I no longer felt safe and was extremely suspicious of his intentions.

I therefore immediately moved to the single sofa on my left to be out of his physical reach.”

“Soon afterwards, I left my meal, returned to the round table and pretended to continue the work, while I anxiously waited for the car. By now I was feeling threatened. At this point, the judge approached me and, standing next to me, he put his hand on my head, and said, ‘You are very beautiful’. I immediately rose from my seat, but before I had a chance to respond to the statement, he caught hold of my arm, saying, ‘You know that I’m attracted to you, don’t you? You must be thinking, what, this old man is getting drunk and saying such things. But I really like you, I love you’. When I tried to move away, he kissed my arm and repeated that he loved me.”

Is this not what Section 354 of the Indian Penal Code, introduced as far back as in 1860 is meant for, My Lord?

He followed her into the elevator, begged don’t leave

“I pushed him away stating that I had to leave immediately. By now it was crystal clear to me that the preceding events were not innocuous in nature, and that he was making unwelcome sexual advances. I quickly picked up my computer and bag, and left the room to take the elevator down. The judge followed me into the elevator, repeatedly saying, ‘Please don’t go’, ‘Did I make you uncomfortable?’, ‘Please don’t leave me, I need your help right now’, and said that the AIFF report needed to be finished. I did not answer the judge anymore. The judge had followed me to the reception. As no car was available, the judge called someone from his cellphone. Soon another man joined us, and I was informed that he was a senior member of the AIFF. The judge informed him that no transport seemed to have been arranged for me, and asked him to handle the matter. When the judge was standing alone with me in the reception, he again repeated his previous words, asking me not to leave and to help him finish the work. I did not respond to him.

I left the hotel at around 10.30 pm. After the car arrived, I returned in it to the PG where I was staying. After reaching the PG, I received a call from the judge asking if I had reached. I curtly said yes and disconnected the call immediately.”

He apologised via text message the next morning

“The next morning, I sent an SMS to the judge stating that given the incidents of the previous night, I felt that I could no longer continue to work under him. The message was sent at approximately 9 am, on 25th December 2012. Thereupon, the judge pestered me with innumerable calls through the morning. However, I did not answer any of his calls. The judge also sent me a text message apologising for the previous night, and requested that I converse with him for five minutes. I did not respond to this message, and the judge continued calling me several times. I did not answer any of his calls.”

I have put forth the details — indeed they have shocked and shattered most of us. And they have prima facie been established by three judges of the Supreme Court, two of whom are incumbent chief justices.

What have you got to say now, My Lord? Does this not call for your resignation from the post of Chair of the West Bengal Human Rights Commission. And if you still refuse to, am I not justified in asking the Prime Minister to request the President of India for your immediate removal from this post, My Lord?