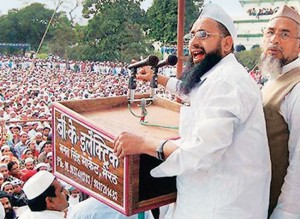 “I have announced a personal reward of Rs 20,000 to the police team which arrests Haji Yakub Qureshi,” he told to a News Agency ANI.Qureshi had defended the Paris attack on French satirical magazine Charlie Hebdo, saying that whoever shows disrespect to the Prophet will invite death.
“Prophet Mohammad had conveyed a message of peace to the entire world and if anyone makes certain cartoons on him will invite death like the cartoonists and journalists in Paris,” Qureshi had said in comments that came at a time when the massacre came in for all-round condemnation across the world.
According to some media reports, Qureshi had also announced a reward of Rs 51 crore to the killers of the Paris journalists.He, however, later denied those reports. “I have not made any such announcement regarding the attack in Paris,” he claimed.
A case under section 505 1 (c) (with intent to incite, or likely to incite, any class or community of persons to commit any offence against any other class or community) of the IPC was registered against Qureshi in the Kotwali police station, SP Om Prakash said.