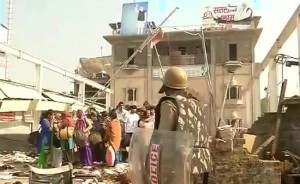 HISAR: In the wake of armed resistance by Rampal’s supporters on Tuesday, Haryana Police has slapped sedition and other charges against the controversial ‘godman’ and several of his followers that include officials of his Satlok Ashram.Police Wednesday said cases were registered last night against Rampal, ashram spokesman Raj Kapoor, another key functionary Purshottam Dass and several other followers under under various Sections of the IPC.
The case has been filed under Sections 121 (waging, or attempting to wage war, or abetting waging of war, against the Government of India), 121A (conspiring to commit certain offences against the state) and 122 (Collecting arms etc. With the intention of waging war against the Govt of India).Besides, the cases have also been slapped against the accused under Sections 123 (concealing with intent to facilitate design to wage war) and other charges that include attempt to murder, assault and under various Sections of the Arms Act, police said.
The fresh cases were filed after clashes broke out at the ashram between police and Rampal’s supporters, who allegedly resorted to firing and threw petrol bombs.Rampal is already an accused in a murder case.Earlier this week, Punjab and Haryana High Court gave the government time till Friday to produce Rampal in contempt of court case, after which authorities have been asking the devotees in and around the Satlok Ashram to disperse and help them comply with court order.
Four bodies have been found at controversial guru Rampal’s ashram in Haryana’s Hisar and two more including an infant died in hospital after thousands of his supporters clashed with the police on Tuesday and used bombs, stones and gunfire to try and stop his arrest in connection with a murder case.63-year-old Rampal, an engineer-turned-guru, has been charged with sedition and rioting, the police said today.
The police said no injury marks have been found on the bodies of four women handed over by the ashram, and a post-mortem will establish how they died. A fifth woman, a 20-year-old, reportedly had a heart condition and died in hospital.An 18-month-old baby who had congenital jaundice also died in hospital. Unconfirmed reports suggest his treatment was delayed because people were not allowed to leave the ashram by Rampal’s followers.
The police say they will investigate all the deaths.Rampal, who has been hiding in his ashram for days using women and children as shields, is believed to inside the ashram with around 5,000 followers. The complex, spread over a 12-acre area in Barwala town, is built like a maze and has deadly traps within, the police said on Tuesday.Ordered by a court to arrest Rampal by Friday, the police have repeatedly warned Rampal’s followers to come out before they storm the ashram again today to find the guru.
Over 200 people including policemen were injured in Tuesday’s violence. Among the injured were over 70 journalists.Some 10,000 people are believed to have left the ashram at night. Many of them said they had escaped; they had been invited to attend a discourse but were used as a human wall that included women and infants.Those who left the ashram have told the police that there were deaths due to cold and lack of food and medicines.
Water and electricity supply had been cut off to the complex earlier this week.On Tuesday, the police used water cannons and teargas to try and disperse devotees before breaking into the fortified ashram. Armed devotees calling themselves ‘Baba’s Commandos’ allegedly attacked the police with acid pouches, petrol bombs, sticks and stones.In anticipation of more violence, there is heavy security in the town today.
A unit of the paramilitary Rapid Action Force is on stand-by and security personnel are patrolling the roads on bikes and horseback.Rampal, who was sacked as a junior engineer with the Haryana irrigation department, is out on bail in the 2006 killing of a villager in firing by his supporters. The Punjab and Haryana High Court ordered his arrest after he repeatedly failed to show up for questioning in the case. Rampal has skipped court 43 times in four years.