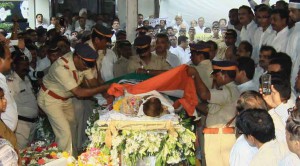 MUMBAI: Former Union minister and Congress leader Murli Deora passed away early Monday in Mumbai after prolonged illness. He died at 3:25 am.He had been unwell and admitted to a hospital. He had come home two days ago, family sources said.Deora’s mortal remains were kept at the Mumbai Congress office, where party workers paid their last respects from 12 noon to 2 pm. His last rites would be performed at Chandanwadi Crematorium today, family sources said.
Several Congress leaders, including other party members, are expected to attend the funeral.Prime Minister Narendra Modi took to micro-blogging site to condole the demise of the former union minister. During the Manmohan Singh-led UPA government Deora served as the minister of Petroleum and Natural Gas, minister of State for Communications and Information Technology.
The 77-year-old Congress leader held several important positions during his decades long political career.During 1968-78 he was the Councillor of Municipal Corporation of Mumbai.He served as Mayor of Mumbai from 1977 to 1978.Deora, an Arts graduate first contested the Lok Sabha polls from Mumbai South constituency in 1980. However, he lsot the elections to Janata Party’s Ratansingh Rajda.
Deora was later elected four times as member of Parliament for Mumbai South.
An industralist by profession, Deora became a Cabinet- rank minister in January 2006 when he replaced Mani Shankar Aiyar as Minister for Petroleum and Natural Gas. He had neverheld a ministerial position before in his Parliamentary career that began with his election from Mumbai South seat in 1985.
In April 2002, he became a Rajya Sabha member. Widely considered pro-US and pro-business, Deora was for long the Congress` principal interface with the industry.Soft-spoken Deora had been instrumental in bringing about some structural reforms driving state firms to their core competence rather than diversifying businesses. He earned the wrath of reformists when he stonewalled attempts to allow skyrocketing oil prices to be passed on to consumers.
An avid Bridge player, he was president of the Mumbai Regional Congress Committee for 22 years from 1984 to 2006.