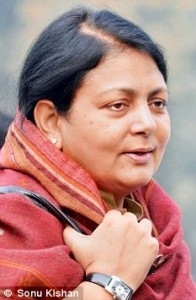 NEW DELHI : Parveen Amanullah, Bihar’s first woman Muslim minister who quit the cabinet two days ago, Thursday joined the Aam Aadmi Party (AAP), saying she wanted the AAP to govern Bihar.
Amanullah, who was the social welfare minister in Nitish Kumar’s cabinet, resigned from the Janata Dal-United (JD-U) and the government Tuesday. She formally quit the Bihar legislature on Wednesday
“I have been in talks with the AAP for a month and have finally decided to join the party,” Amanullah told the media here.
She said she was happy to join the AAP and become a part of the promised change in the country.“The people of Bihar need to understand that if they really want the policies made by the government to favour them, it is important to vote the AAP to power in the state.
“It is not just poor governance but also the absence of transparency and several other drawbacks that compelled me to (give up) the ministership and the JD-U,” said Amanullah.
Amanullah, a former RTI activist, is the daughter of diplomat-turned-politician Syed Shahabuddin and the wife of IAS officer Afzal Amanullah.Speaking on the occasion, AAP leader Sanjay Singh said there was a great need of people like Amanullah who can play a major role for the party in Bihar during the general election.