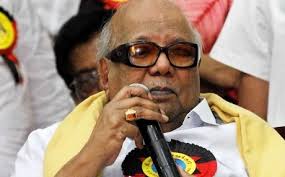 NEW DELHI : Congress has revived talks withDMK for a pre-poll alliance in Tamil Nadu, amid indications that the hostility in the Dravidian outfit has softened over the last month since it declared that it would not tie up with the UPA and that sections within have come around to consider reviving the partnership provided their demands are accepted.
Sources said DMK could demand relief for party patriarch M Karunanidhi’s daughter Kanimozhi in the “trumped up” money laundering case against her as well as a tough stand by India against Sri Lanka on the Tamil issue at United Nations Human Rights Council session in March.
The meeting between Congress leader Ghulam Nabi Azad and Karunanidhi last week was to break the ice after it appeared that the relations had snapped. At the general council meeting in December, the DMK chief had said that he would not tie up with Congress while he followed it up with an interview praising Narendra Modi as an administrator.
There are already indications that DMK is not as hostile to Congress as it had appeared last month, Though heir apparent M K Stalin remains strongly opposed to any truck with the UPA, the DMK seems eager to rope in Congress along with the bit parties in the state that cater to caste groups, dalits and Muslims to forge a powerful coalition against the ascendant Jayalalitha-led AIADMK.
The party may step up its engagement with Congress next month in view of the forthcoming UNHRC session in which the US may again propose to bring a resolution against Sri Lanka. Sentiments over the lot of Sri Lankan Tamils may be whipped up again in Tamil Nadu with the idea to pressure the UPA. Given the discomfiture of the Centre, AIADMK boss and chief minister J Jayalalithaa herself may lead the charge to seeking sanctions against the island neighbour.
However, it will also provide Congress with an opening to project itself as sensitive to the Tamil concerns and push its case for alliance with the DMK. A strong pro-Tamil stance at the international forum would also give DMK just the right cover to revive partnership with Congress.
The calculation about the coming opportunities appears to have driven Congress towards reopening the channels with DMK.
A minor indication about the possible realignments may come next month with Rajya Sabha elections. DMK can win a seat with the support of Congress.Observers said while DMK was near-unanimous about distancing itself from the Congress, it now appears divided on the issue. The main reason for rethink is that even if DMK thrashes out an alliance with dalit, OBC and Muslim outfits like Desiya Murporku Dravidar Kazhagam (DMDK), Viduthalai Katchi Chiruthaigal led by Thol Tirumavalavan, Puthiya Tamizhagam, a dalit party led by Dr Krishnasamy, IUML led by Kader Mohideen and Manithaneya Makkal Katchi, another Muslim outfit led by M H Jawaharullah, a gaping hole in its campaign would be the lack of a prime ministerial candidate while rival Jayalalithaa has projected herself as a contender.
To take on the arch rival, DMK may need a pre-poll alliance to show that it was playing for the national stakes.