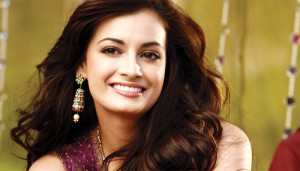 MUMBAI: Actress and former beauty queen Dia Mirza, who is set for her wedding to long time beau Sahil Sangha at a ceremony here later this week, missed her chance to cast her vote in the Maharashtra assembly elections Wednesday. She says had it not been for her D-Day, she wouldn’t have skipped voting.
“For the first time, will be missing out on my opportunity to #vote in Mumbai… If not for my wedding I’d never miss out on this,” Dia posted on Twitter — the social networking platform where several Hindi film celebrities posted their selfies after casting their vote.The radiant beauty, who was crowned Miss Asia-Pacific International in 2000, went on to feature in Bollywood films such as ‘Rehnaa Hai Terre Dil Mein’ and ‘Parineeta’.
Known for her philanthropic efforts for various environmental and social causes, Dia is also a film producer, while her would-be groom Sahil is a filmmaker, who directed ‘Love Breakups Zindagi’, the first movie under their jointly owned banner, Born Free Entertainment.