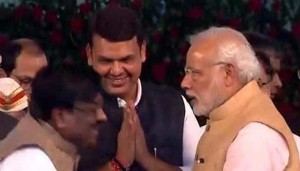 MUMBAI: Devendra Fadnavis has been sworn in as the BJP’s first Maharashtra chief minister, the state’s 27th. Nine ministers also took oath at Mumbai’s Wankhede stadium, filled to capacity. Among the new Maharashtra ministers is Pankaja Munde, who drew an electric applause as she came up to take oath. Maharashtra BJP veterans Vinod Tawde and Eknath Khadse were also sworn in.
On another stage, Prime Minster Narendra Modi, seated next to senior BJP leader LK Advani, clapped after the man he has handpicked to lead Maharashtra took oath in Marathi. Shiv Sena chief Uddhav Thackeray arrived late and was seated five people away from Mr Modi, next to the Congress’ Prithviraj Chavan, Mr Fadnavis’ predecessor. The star-studded turnout included actors Amitabh Bachchan, Shahrukh Khan and Aamir Khan and industrialists like Ratan Tata and the Ambani brothers.
After the Shiv Sena publicly bemoaned the “humiliation” of its top leaders, BJP president Amit Shah had allegedly phoned Mr Thackeray and requested his attendance. Mr Thackeray had RSVP-ed the event after the BJP rejected his party’s demand for its leaders to be included in the small cabinet that took oath today.
The 44-year-old Mr Fadnavis, who now heads a minority BJP government, has to prove his strength on the floor of the Assembly within 15 days. The BJP posted its best-ever result in the Maharashtra elections, but not an outright majority. It is now in talks with the Shiv Sena to renew the 25-year alliance they snapped in September.
Any plans of the Sena to exploit the BJP’s need for more seats were stultified with Sharad Pawar’s party, the NCP, deftly offering external support to a minority government.The Shiv Sena has expressed its desire to join the government in tones ranging from aggressive to coaxing; the BJP has so far only said that it hopes negotiations will come to fruition.
While being made to wait, the Sena has tried to prove its worth as a partner, using editorials in its mouthpiece, the Saamna, to praise the Prime Minister and to wish Mr Fadnavis success in leading Maharashtra. Today’s editorial defended the scale of the event at Wankhede Stadium that had an invitee list of 30,000, and was designed by a top Bollywood art director.
“It’s laughable to hear criticism from those who supervised the loot of the state,” said the Sena mouthpiece, offering a quick rebuttal to the Congress, which was defeated in the election and has censured the BJP for the pomp and splendor of today’s event.