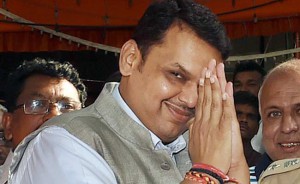 NEW DELHI : Devendra Fadnavis, 44, will be sworn in on Friday as the BJP’s first Maharashtra chief minister. He has 15 days after that to prove his government’s majority in the state assembly, he said after meeting the governor today.
On Friday evening, Prime Minister Narendra Modi will be present at Mumbai’s famous Wankhade stadium when Mr Fadnavis and a small cabinet of ministers, all from the BJP, take oath at a grand ceremony at 4.30 pm.
The BJP is 22 seats short of a majority in the 288-member Assembly, but top leaders say it is comfortable with its government being in a minority to start with and will not rush negotiations to get the support of former ally, the Shiv Sena; the BJP had called off their partnership just before the elections.
Sharad Pawar’s Nationalist Congress Party, which offered the BJP unconditional support, has also said that its legislators will abstain from voting in a test of strength to help the BJP sail through.
Devendra Fadnavis, who will be Maharashtra’s second youngest chief minister – Mr Pawar was the youngest at 38 – was the front-runner ever since the BJP posted its best performance ever in the state earlier this month, but has kept a low profile through bouts of political muscle flexing by other leaders, including union minister and Mr Fadnavis’ one-time mentor Nitin Gadkari, whose supporters wanted him to be chief minister.
He thanked the BJP’s legislators for electing him their leader today, saying, “There are many people in the Maharashtra BJP who are capable of taking this responsibility and yet they chose me.” He also thanked Prime Minister Modi and BJP chief Amit Shah crediting them with the party’s performance in the elections.
Mr Modi and Mr Shah have put aside caste and other considerations in picking the non-Maratha leader – Mr Fadnavis is a Brahmin – from Nagpur. Devendra Fadnavis is seen to have scored with a very clean image, high energy and much hard work that he has done as the BJP’s Maharashtra chief. But he has superceded several senior BJP leaders in the state and has the delicate task of keeping them in good humour.