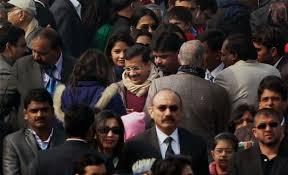 NEW DELHI : welcome to Gujarat was loaded with hostility. He was detained briefly at a police station this afternoon. In the evening, his car was attacked leaving its windshield broken as the convoy passed through Kutch.
Mr Kejriwal said his detention at a police station in the western town of Radhanpur, 170 kms from Ahmedabad, was payback from Narendra Modi, the BJP’s prime ministerial candidate, who has centre-pieced the development of Gujarat in his campaign. Mr Kejriwal, a former tax inspector, has dedicated his Gujarat trip to auditing that much-lauded modernization.
“We are exposing all claims of development and clean governance,” said the 45-year-old.  In the evening, riots erupted in Delhi and Lucknow where his party workers clashed with those from the BJP. In the capital, the violence spanned the evening rush hour. AAP leaders said chairs and bricks were thrown at them from within the BJP office. The BJP countered that it had acted in self-defense.  As the ugly street battles played out on national television, Mr Kejriwal tweeted an appeal for calm to his supporters.
HN Thakkar, the collector of Patan in Gujarat, said Mr Kejriwal had been stopped to explain why he had not taken prior police permission for his road-show, a requirement of the election code of conduct that is now in place because national elections have been announced. The official later said that he accepted Mr Kejriwal had not violated election rules and that his convoy consisted largely of media vehicles and was not a political procession.
Mr Kejriwal resigned last month after a two-month stint as Delhi’s Chief Minister. His Aam Aadmi Party (AAP) has suggested he will contest Mr Modi if the BJP leader runs for Parliament from anywhere outside of Gujarat. Opinion polls predict that the BJP, led by Mr Modi, will emerge as the largest party but will fall short of a majority in the general election that begins on April 7.