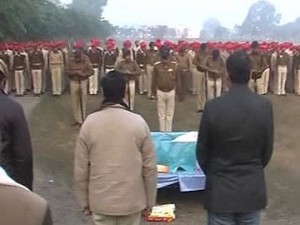 Patna : A senior police officer and his colleague’s son were shot dead inside a police station in Bihar’s Vaishali district late on Wednesday night reportedly after they had an argument with a group of men who were allegedly drunk.
According to reports, main accused Shrikant Rai, a former village head in the area, and his associates were consuming alcohol within the premises of the Chudawanpur police station when they had an altercation with the cop, station in charge Anil Kumar.
After opening fire on the police officer and his colleague’s son, the accused fled from the police station. They are yet to be arrested. Senior police officials in the area say a search is on to nab the accused and add that they are trying to find our more on what caused the altercation.NDTV.