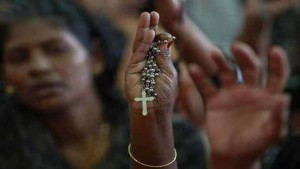 JABALPUR (MP) : A cathedral premises and a Catholic school where people had gathered for a religious convention were vandalised allegedly by Hindu activists at Jabalpur in Madhya Pradesh, the second incident to come to light after Saturday’s attack on a church in Maharashtra, drawing outrage from the Christian community.
No arrests have been made so far in connection with the Jabalpur incident, which took place on March 20 and the early hours of March 21, when some members of the Christian community were allegedly assaulted and threatened by members of Bajrang Dal and Dharam Sena, who attacked the school and a parsonage alleging that religious conversion had been taking place there.
There was also no breakthrough in the probe into the church attack in New Panvel area in Navi Mumbai though police were grilling some suspects.
The CCTV footage showed that the attack was carried out by two masked persons who were riding pillion on a motorcycle at around 1.30 am on Saturday when they hurled stones at the Saint George Catholic church located near a bridge in New Panvel.
There are no eyewitnesses to the incident and the scanning of CCTV footage has also not thrown up any substantial leads to identity the attackers, police said.However, Maharashtra Chief Minister Devendra Fadnavis said that the culprits will be nabbed soon.
In Jabalpur, police booked a leader of Dharma Sena and some others but church authorities questioned the “delay” in arresting the culprits.
“Dharma Sena leader Yogesh Agrawal and Raju Rai and a few others have been booked under relevant sections of the Indian Penal Code and efforts are on to track down and arrest them,” Jabalpur Superintendent of Police H.C. Mishra said.
The church authorities alleged that the miscreants stormed into the cathedral premises and a school housing a grotto with St Mary’s idol.They broke earthen pots and shattered glass panes of windows of the parsonage, accusing Father Thankachan Jose of converting the Hindus to Christianity.
Ravi Francis, claiming to be a witness, said he was roughed up by Dharma Sena and Bajrang Dal activists, who stormed into Saint Thomas School campus, where some people who came for a convention were staying.
Though Fr Thankachan and police officials held talks with leaders of the Hindu outfits to ease the situation, some of them stormed into the premises and started abusing them, he alleged.
Police sought to chase them from the campus but they refused to give in and marched to the nearby Saint Peter and Paul Cathedral where the first day of the convention was held.
They then barged into the cathedral premises shouting ’Jai Shree Ram’ and demanded that Fr Thankachan be handed over to them. As they could not find him there, they vandalised the parsonage, close to the Cathedral, Fr Francis said.