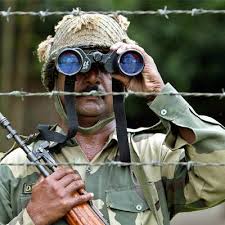 NEW DELHI : The Chinese troops are training Pakistan Army personnel right across the India-Pakistan border in Jammu and Kashmir, a report said on Friday.This comes as a major worrying factor for India.
As per a report submitted by the Border Security Force intelligence wing, the Chinese troops have been seen training Pakistani Armymen in “weapon handling” techniques bang opposite Rajouri sector of International border.
The report, accessed by a news agency, said these military manoeuvres were being conducted at forward defence locations of Pakistan which are usually manned by border guarding personnel– the Pakistan Rangers.
Preliminary inputs analysed by BSF also showed some Pakistan Army units have taken over paramilitary posts of Rangers opposite Sriganganagar sector.BSF also found a handful of new observation towers have also been set up by Pakistan in recent past along Abohar and Gurdaspur sectors in Punjab.
The BSF intelligence reported that phone intercepts along the border indicate that Pakistan Army and Rangers are planning to deploy snipers and sharp shooters at strategic locations and posts to target Indian soldiers and assets.
The Border Security Force intelligence also reported that a special squad of Pakistani Army commandos have been placed at select locations along the IB and LoC, which may attempt to carry out raids and Border Action Team (BAT)-sponsored attacks into the Indian territory.
It also said a large grouping of terrorists has been detected along Sialkot area in Pakistan which may be planning to infiltrate into Jammu and Kashmir at a time when Assembly polls are scheduled in the state.It also said agencies have detected a few launch pads for terrorists to infiltrate along either the International Border (IB) or the Line of Control (LoC).
The Indo-Pak border, which has been witnessing a series of ceasefire violations in the last few months is peaceful but tense, in the last few days, the report said. The BSF report said that along the Indo-Pak border in the Sir Creek area near Gujarat about 25 Indian fishing boats and 155 fishermen had been apprehended by Pakistani maritime authorities in the current fishing season.
During the spate of recent ceasefire violations in October, the report said, retaliatory action by BSF killed at least 5 jawans on the other side.