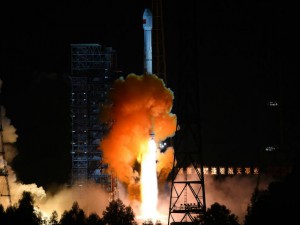 BEIGING: China completed its first return mission to the moon early Saturday with the successful re-entry and landing of an unmanned probe, state media reported, in the latest step forward for Beijing’s ambitious space programme.
The probe landed safely in northern China’s Inner Mongolia region, state news agency Xinhua said, citing the Beijing Aerospace Control Center.
Xinhua said the probe took “some incredible pictures” of the Earth and the moon.
Prior to re-entering the Earth’s atmosphere, the unnamed probe was travelling at 11.2 kilometres per second (25,000 miles per hour), a speed that can generate temperatures of more than 1,500 degrees Celsius (2,700 degrees Fahrenheit), the news agency reported.
To slow it down, scientists let the craft “bounce” off Earth’s atmosphere before re-entering again and landing.The probe’s mission was to travel to the moon, fly around it and head back to Earth, the State Administration of Science, Technology and Industry for National Defence (SASTIND) said in a statement at its launch eight days ago.
The module would have been 413,000 kilometres from Earth at its furthest point on the mission, SASTIND said at the time.The mission was launched to test technology to be used in the Chang’e-5, China’s fourth lunar probe, which aims to gather samples from the moon’s surface and will be launched around 2017, SASTIND previously said.
Beijing sees its multi-billion-dollar space programme as a marker of its rising global stature and mounting technical expertise.The military-run space project, which has plans for a permanent orbiting station by 2020 and eventually to send a human to the moon, is also seen as evidence of the ruling Communist Party’s success in turning around the fortunes of the once poverty-stricken nation.
China currently has a rover on the surface of the moon.
The craft, called the Jade Rabbit and launched as part of the Chang’e-3 lunar mission late last year, has been declared a success by Chinese authorities, although it has been beset by mechanical troubles.