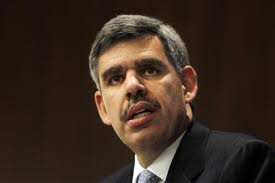 CALIFORNIA: While at the top of world finance, Mohamed El-Erian juggled $2 trillion of investments and wrestled with the knottiest economic problems. But it has now emerged his greatest dilemma arose from asking his daughter to brush her teeth.
When the Oxbridge-educated economist stepped down last year as the chief executive of the PIMCO investment fund, one of the largest on the planet, rumour was rife that he had fallen out with its founder Bill Gross. But El-Erian on Wednesday revealed one main reason for leaving his post was a conversation with his then 10-year-old daughter about brushing her teeth which led to her writing him a note listing the 22 important events in her life he had missed due to work. The document presented to the financier included missing the child’s first day at school, her first football match and a Halloween parade.
El-Erian, whose earnings at PIMCO reportedly reached as much as $100m a year, said the incident showed him instantly that he had allowed his relationship with his daughter to suffer at the expense of his globetrotting job. In an interview with Worth magazine, he said, “About a year ago, I asked my daughter several times to do something — brush her teeth I think it was — with no success. I reminded her that it was not so long ago that she would have immediately responded.
“She asked me to wait a minute and then went to her room and came back with a piece of paper. It was a list that she had compiled of her important events and activities that I had missed due to work commitments. Talk about a wake-up call.” He continued, “I felt awful and got defensive: I had a good excuse for each missed event! Travel, important meetings, an urgent phone call, sudden to-dos. But it dawned on me that I was missing an infinitely more important point.
“As much as I could rationalize it … my work-life balance had gotten way out of whack, and the imbalance was hurting my relationship with my daughter. I was not making nearly enough time for her,” he added.
The 56-year-old investment guru last year swapped his role at PIMCO’s California headquarters for a “portfolio of part-time jobs”, including a role as chief advisor to the fund’s German parent, Allianz.