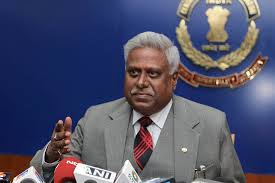 NEW DELHI : CBI chief Ranjit Sinha on Wednesday said there were legal inconsistencies in the proposed ombudsman Lokpal and pointed out that certain clause in the Act on issues related to disciplinary action against an investigating  officer of the Lokpal or the CBI was incoherent.
Picking up Section 38, which deals with allegations against an officer of Lokpal or the CBI, Sinha said in his letter to DoPT Secretary S K Sarkar that clarification was required as to whether the entire agency could be divested of all powers and responsibilities for the wrongdoing of an officer.
According to Section 38, if any officer of the Lokpal or agency engaged or associated was likely to destroy or in any way tamper with the evidence or influence witnesses, the Lokpal might, by order, suspend such officer or employee or divest such agency engaged or associated with it of all powers and responsibilities hereto before exercised by it. Sinha also highlighted anomalies related to Section 25, which empowers the Lokpal to order probe and give direction to the Delhi Special Police Establishment in respect of the matters referred for preliminary inquiry. “It is not clear on what grounds such directions could be given by the Lokpal to the investigating agency,” he said.
He maintained that all issues need to be thoroughly examined to avoid any litigation, as otherwise the entire anti-corruption effort would be weakened. The Bill was passed during the winter session of Parliament and the government is already in the process for appointing the first Lokpal.
Referring Section 46(1) of the Act, which deals with punishment for false and vexatious complaints, Sinha said the process should be initiated only after the individual approaches the competent court.