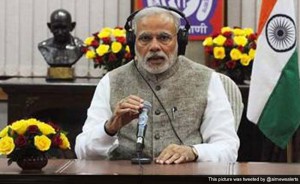 NEW DELHI : As promised, Prime Minister Narendra Modi talked about the menace of drugs in his third radio address to the nation, Mann ki Baat, today.
“You may think why the PM is speaking on the radio,” he said. “I have always heard that if you share grief, you lessen your burden and if you share your happiness, it increases. I’m pained by the grief of families whose children get caught in the trap of drug menace.”
During his last radio address on November 4, the Prime Minister had invited views on the issue and had asked NGOs to share their experiences. ” I am worried as some of our sons and daughters get addicted to drugs and the entire family is torn apart,” he said today.
Describing drugs as a “3D problem – darkness, destruction, devastation,” he said the government will start a toll-free helpline to tackle the issue, since it is often the parents who have trouble discussing the matter. Celebrities should do their bit and former addicts should step forward to share their stories, he said.
“When I was the Chief Minister of Gujarat, people working under me asked for leave,” he said. “They would not specify the reason, but when prodded gently, they would tell me that their child was addicted to drugs. I have come across helpless and angry mothers in Punjab.”

But in such cases, it is drugs which are to be rejected, not the child, he said. A child does not become “bad”, parents need to monitor them, their friends, their habits, mobile phones, he said.
“Our ancestors said a child should be treated with love until the age of five years, by the age of 10, a child should be disciplined and when he is 16, treat him like a friend,” he said.
The drug habit creeps in only on youth who have no particular goal or dream in life. To evade the lure of drugs, one has to be focused and result-oriented, like a sportsperson, he added. Addressing the youth directly, he said, “Have you ever wondered, where the money you spend on drugs go? The bullet that hits our soldiers is backed by drug money.”
The Prime Minister had started his radio chats on October 3 with a 15-minute speech titled ‘Mann ki Baat’. In it, he had asked people to join the Clean India campaign.In the second, he had discussed the issue of black money, vowing to bring back “every penny of poor man’s money” stashed abroad as it was “an article of faith” for him.