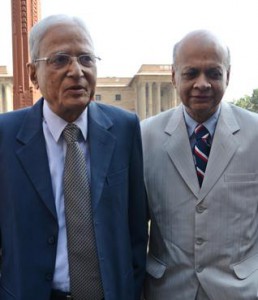 NEW DELHI : Tax evasion needs to be made a serious ‘criminal offence’ to force foreign countries to reveal names and account details of Indians stashing illicit wealth abroad, the Special Investigation Team on black money has said.
While adding more teeth to India’s pursuit of black money kept abroad, this would also check generation of unaccounted wealth within the country, the SIT chairman M.B. Shah said.
At present, tax evasion is a civil offence in India and it is dealt under the Income Tax Act, 1961 while forex violations are dealt under the Foreign Exchange Management Act (FEMA).Both the laws are civil in nature and do not have criminal proceedings attached as such.
“We have made a serious pitch for this (making tax evasion a serious criminal offence in India). One reason is that, if tax crimes remain civil in nature, the foreign governments will not cooperate,” Mr. Shah told PTI on Sunday.
“If this is made a crime, then there is no difficulty and then they (foreign countries) are bound to reveal the names. That is the main purpose,” he added.
The Supreme Court-constituted SIT, which has former Supreme Court judges Justices Shah and Arijit Pasayat as chairman and vice-chairman, recently submitted its latest report on black money menace, wherein it has disclosed tracing of Rs. 4,479 crore held by Indians in a Swiss bank and unaccounted wealth worth Rs. 14,958 crore within India.
In this report, the SIT pointed out that more than 25 countries have made “tax crimes” a predicate offence.India is seeking cooperation from a number of foreign jurisdictions, including Switzerland, in cases of suspected black money, but its requests have been turned down in maximum number of such instances as tax evasion is not dealt under strict criminal laws, unlike money laundering provisions.
To deal with this issue, the SIT has suggested making tax evasion of Rs. 50 lakh and above a ‘predicate offence’, saying this would enable easier investigation into tax evasion crimes under the stringent laws of money laundering as stipulated under the Prevention of Money Laundering Act (PMLA).
Justice Pasayat said there is also a need to limit holding and transportation of cash and to check large-value ‘unreported’ cash dealings that are rampant even at public places like shopping malls.
Justice Pasayat said the recommendations have been made to the government in the right earnest and after serious thinking.A deterrence needs to be built when it comes to tax evasion even as the high-powered panel has suggested that this could be done with some relaxations, he added.
“The government needs to seriously examine the issue and take steps to make “tax crimes” a predicate offence. To prevent any hardship to salaried or small tax payer, a high threshold of say, more than Rs. 50 lakh of tax evasion could be considered as being a predicate offence,” the SIT has said.
In its second request, Shah said, the SIT also wants specific regulations to check large-scale possession and transportation of cash.“To some extent this can be made an offence. This will not be easy, but once laws are made that unreasonable cash beyond a prescribed limit will be confiscated it would act as a deterrent. (There is) no doubt that such a measure will act as a deterrent,” Shah said, while adding this could be done with some riders as prevalent in some European countries.
“It is suggested that for regulating the possession and transportation of cash, particularly putting a limitation on cash holdings for private use and including provisions for confiscation of cash held beyond prescribed limits, provision in the Act should be made.
“This can be done in India too. Again, while implementing the suggestions, to ensure that small transactions, which make a bulk of common man’s daily transactions, are not affected and for that, a threshold limit could be kept,” the SIT said, while suggesting Rs. 10-15 lakh for such a limit.
Justice Pasayat said that investigative agencies have informed the SIT that huge transactions are done in cash and mostly there are no records of it.“A number of transactions are done while shopping in malls to the tune of Rs. 1-2 lakh each. Once keeping of huge amount of unaccounted cash is checked, it will solve such problems,” he said.
These measures will not only create criminal deterrence, but also “social deterrence,” he added.