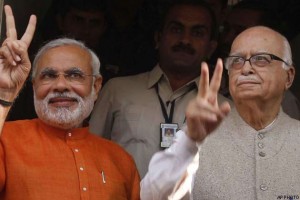 NEW DELHI : The Bharatiya Janata Party (BJP) is attempting to be the “early bird” by readying to announce the first list of party candidates on February 27 for the upcoming Lok Sabha elections. Leader of Opposition in Lok Sabha, Sushma Swaraj, today confirmed that after a meeting of the BJP’s Central Election Committee (CEC), a list is likely to be declared. Sources added that the list may include the names of some of the top leaders. Party sources also said after the first meeting, the CEC – of which BJP’s prime ministerial candidate Narendra Modi is a member – will sit frequently and clear candidates.
Sources are tight-lipped about Modi but they say the names of LK Advani, Sushma Swaraj, Rajnath Singh, Arun Jaitley and Murli Manohar Joshi may be announced over the next month.Hectic consultations have been on between top BJP leaders as well as between the party and its ideological mentor, Rashtriya Swayamsevak Sangh or RSS over the choice of candidates.
Following the RSS’ advice, then BJP president Nitin Gadkari had in 2012 declared that to energize the party cadres, all top leaders should contest elections. Gadkari has made it clear that he will contest the Lok Sabha polls.
A faction in the RSS was also of the view that elders like Advani and MM Joshi should not contest the next polls and act as mentors.
But now doubts about Advani contesting again have been buried. RSS feels denying him the chance will amount to humiliating the patriarch and divide the party.In fact, Advani arrived unexpectedly at the party headquarters in Delhi this afternoon. When asked about his campaign, the veteran said, “Where is the question about starting a campaign? It is already under way.” The 86-year-old is the sitting MP from Gandhinagar in Gujarat.
He also said the BJP was in a good position to emerge as the single largest party in the 16th Lok Sabha. “The Congress’ corruption and misgovernance has ensured that they are at their weakest and the BJP is the strongest it ever was,” Advani said.
Sushma Swaraj, elected to the 15th Lok Sabha from the Vidisha seat in Madhya Pradesh, added another spin to the party’s campaign today. Although she is tipped to be projected from the same seat again, Swaraj said she would follow the party’s diktat on the matter.
“I am a loyal soldier of the party. I have gone everywhere, from Delhi (she contested the Assembly elections) to Bellary. If the party now tells me to fight from Telangana, I will go there,” she said.Her reference to Telangana is being seen as significant. Swaraj had publically backed the creation of the state, and then played a crucial role in the passage of the Andhra Pradesh Reorganisation Bill in the Lok Sabha on February 18 despite din and protests.
Speaking during the debate in the House, she had reminded the people of Telangana, “Don’t remember just your Sonia Amma. Don’t forget your Chinnamma (little mother).”
Sitting across the table from Rajnath Singh, who had contested from Ghaziabad in Uttar Pradesh in the last Lok Sabha elections, Swaraj, at a press conference in Delhi, also set off a new buzz about the BJP President contesting from Vidisha. “I am not fixated to any seat. If Rajnath ji wants to contest from Vidisha, I will invite him there. Mera kya hai, mein to Telangana chali jaoongi (my candidature doesn’t matter so much, I could even go to Telangana.),” she said.
It is not certain where Arun Jaitley, a Rajya Sabha MP from Gujarat, will contest from. While those close to Jaitley have been hinting that he is considering New Delhi, Amritsar and Jammu as possible picks, some leaders in the party say he may contest from safer Gujarat.
The biggest buzz, however, remains over Modi. Speculation had been on in the party and cadres about the possibility of him contesting from either Varanasi, from where Murli Manohar Joshi is the sitting MP, or Allahabad – two seats from the Hindi heartland.
this correspondent  had reported in September last year that Modi is averse to contesting from Uttar Pradesh and abandon his state, Gujarat. The latest buzz is that Modi could contest from two seats simultaneously, one from Gujarat and another from the politically-crucial Uttar Pradesh.
With recent surveys hinting at a BJP win, top leaders are redrawing their plans. Jaswant Singh, an MP from Darjeeling in the 15th Lok Sabha, is one such leader. After the party won Rajasthan in December last, Singh is eyeing a return to his home state. “I have requested my party president that to return to the 16th Lok Sabha, I may like to go back to my home state,” Singh told this correspondent.
Interestingly, despite the upbeat mood, party elder and ex-president M Venkaiah Naidu, who hails from Nellore in Andhra Pradesh, has opted out of the race. “I have decided to work for the party instead of contesting myself,” he said.