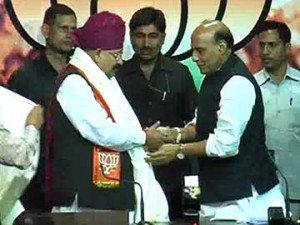 NEW DELHI :  Satpal Maharaj, a parliamentarian from Uttarkhand, joined the BJP today after 25 years as a member of the Congress.Mr Maharaj, seated next to BJP chief Rajnath Singh, said the party’s prime ministerial candidate, Narendra Modi, “will take India ahead of China”.
Mr Maharaj, 62, has a massive following in  the hill state of Uttarkhand. He was upset with the Congress when it selected Harish Rawat as the chief minister in February this year. More recently, the candidates he recommended for the Garhwal region were not cleared by the Congress.His wife Amrita Rawat is a Congress legislator in the state assembly. Mr Maharaj reportedly has the support of 10 of the party’s 33 legislators in Uttarkhand – that gives him the power to put the Congress government in the state in jeopardy.