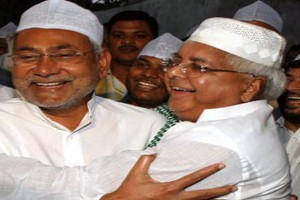 PATNA: Lalu Prasad Yadav and Nitish Kumar have turned their once-famous rivalry into a friendship with very real benefits. Along with the Congress, they have won six of 10 assembly seats that were decided today in by-elections. Mr Kumar said the result signaled which way the political winds are blowing in the state, which will pick its new government next year.
The BJP, which held six of these 10 seats, has won only four. The party’s Shahnawaz Hussain, a prominent Bihar leader was quick to blame the state leaders, him included. “The result is not as we expected. The state BJP takes responsibility,” he said, adding, “We must not compare this with the Lok Sabha elections results.” The BJP had swept the national election in May, winning 31 of the Bihar’s 40 parliamentary seats. The party had then held sway in eight of these 10 assembly segments.
Lalu and Nitish, who fought each other for two decades for control of Bihar, then teamed up on the premise that they would consolidate the Muslim-Yadav-Backward Caste votes to take on the BJP.From a Mumbai hospital, Lalu Yadav tweeted today, “I thank the people of Bihar for making the alliance win. Voters across the country have rectified the mistakes made in Lok Sabha elections.”
Leaders from Lalu’s RJD and Mr Kumar’s Janata Dal (United)said today’s election proves that Prime Minister Narendra Modi cannot deliver the state to his party, the BJP, next year.Nitish Kumar, 63, was Chief Minister of Bihar when his JD(U) was landed with the humiliation of winning just two seats in the national election. Mr Kumar claimed responsibility for the debacle and resigned, installing another JD(U) leader as chief minister.
Last year, Mr Kumar terminated a 17-year partnership with the BJP before the party formally announced Mr Modi as its presumptive prime minister. Mr Kumar had been an indefatigable critic of Mr Modi, describing him as a communal and divisive leader over the 2002 riots that tore through Gujarat, leaving more than 1,000 people dead, most of them Muslims.The BJP said Mr Kumar’s charges against its leader were a misguided attempt to appease to the 17% Muslim population of Bihar.