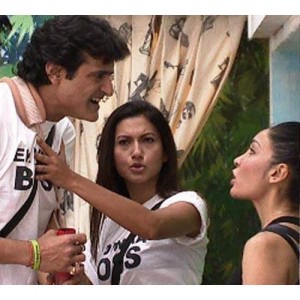 Actor Armaan Kohli was on Monday arrested from the set of “Bigg Boss Saath-7” following a complaint filed by British singer-actress Sofia Hayat for allegedly assaulting her during their stay in the reality show, a police official said.

A source from channel Colors, which airs the popular show, too confirmed that Armaan was arrested on Monday night.

Sofia filed her complaint at the Santa Cruz police station here Dec 11, just days after her eviction from the TV show. During her stay on the show, an argument had broken out between her and Armaan. Armaan ended up hitting Sofia with a mop and that left her hurt.

“Following the complaint by Hayat, an FIR was registered against co-contestant Armaan Kohli,” Arun Chavan, Senior Inspector at Santacruz police station, had told.

The Santacruz Police, after registering a case, transferred the complaint to their counterparts in Lonavala in Pune district, who conducted further probe into the matter.

Kohli has been booked under sections 324 (voluntarily causing hurt by dangerous weapons or means), 504 (intentional insult to provoke breach of peace) and 509 (word, gesture or act intended to outrage the modesty of a woman) 506 (criminal intimidation) and 354 a (sexual harassment) of the Indian Penal Code, police said.

After filing of the FIR, the 29-year-old actress had tweeted: “Police report done. I’m exhausted with today!. The police have been amazing. Santacruz police have been very professional and courteous.”
Armaan’s family in return had retaliated by threatening to file a defamation suit against the British singer and model.

During her stay, Sofia had quarrel with fellow contestants Tanishaa, Ajaz Khan, but her arguments with Armaan Kohli allegedly turned ugly and violent. During the show, she also demanded the eviction of Armaan for his unruly behaviour.

Armaan, who has worked in films like “Virodhi”, “Aulad Ke Dushman” and “Jaani Dushman: Ek Anokhi Kahani”, has been in the spotlight on “Bigg Boss Saath-7” several times due to his temper.

The show, hosted by Bollywood star Salman Khan, features celebrities from different walks of life who are made to live together in a secluded house with over 80 well-placed cameras which pry on their activities 24X7.