NEW DELHI :Megastar Amitabh Bachchan is set to make his debut on a fiction TV series titled “Yudh” and a grand event was planned here to unveil the poster, but the capital’s storm played a spoilsport leaving him disappointed.
“It was to be a grand ‘poster drop’ on the facade of the Statesman building in Delhi, Connaught Place… So… the Statesman… and the unfurling of the poster for ‘YUDH’. Well a slight disappointment! 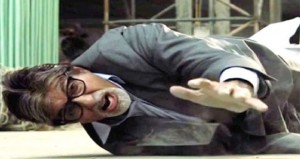 “There was an early morning storm in Delhi just before we landed, a recurring factor in this part of the world at this time of the year due to the excessive heat in the summer, and because of the strong winds the poster, a very large, almost 150 feet sized could not be put up,” he posted on his official blog srbachchan.tumblr.com.
The activity didn’t happen as planned, but the dramatic poster of the series directed by Ribhu Dasgupta, was launched here Wednesday in the presence of his co-stars Sarika and Aahana Kumra, the show’s creative director Anurag Kashyap, and creative consultant Shoojit Sircar, among others.
In the series, expected to go on air from July, Amitabh will be seen playing the role of construction company co-owner Yudhishthir Sikarwar.
It is co-produced by Amitabh’s production company Saraswati Creations with Endemol India and is being promoted as a “first of its own kind” TV series.