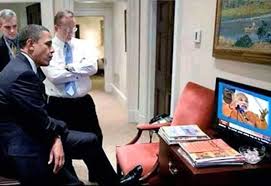 WASHINGTON/ NEW DELHI : “Even Obama listens (to) the speech of NaMo,” says the caption of a doctored picture showing the US President watching a Narendra Modi speech on TV which is in circulation on social media outlets today.
In the original picture of January 28,2011, Obama is seen watching a televised speech by the then Egyptian President Hosni Mubarak in the Outer Oval office. The picture is taken by Pete Souza, according to the White House which has posted it on its flicker account and is publicly available.
In the doctored picture, Mubarak, who ruled Eygyt for 30 years before he was forced to leave following a popular uprising, has been replaced by Modi. The Gujarat Chief Minister is seen delivering a speech, which is being watched on a small television screen by Obama and his team.
Among others, the picture was shared by BJP Member of Parliament from Navasari in Gujarat C R Paatil, a known Modi supporter.
When contacted, Patil said he was not aware that the photograph was morphed. He said he received it on his Facebook page from somebody and forwarded it without verifying its authenticity. He said it could be a handiwork of BJP rivals. “Why should BJP or a Narendra Modi supporter do it and get a bad name?,” he said. I am trying to find the details of the photograph, he said.