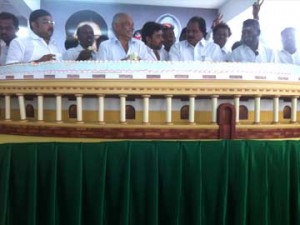 CHENNAI : The supporters of AIADMK supremo J Jayalalithaa, who has already gone public with her ambition of becoming the country’s next Prime Minister, signaled their determination to help her realise her goal by cutting a giant Parliament-shaped cake in the party headquarters at Chennai this afternoon to celebrate her 66th birthday. Seeking to gain a headstart over her rivals, Ms Jayalalithaa simultaneously announced the names of her party’s candidates for all the 40 Lok Sabha constituencies from Tamil Nadu and Puducherry.
Her supporters had started gathering in the AIADMK headquarters in Chennai since early this morning. The selection of the shape of the cake was symbolic, as it conveyed the message that they were serious about getting Puratchi Thalaivi, or the Revolutionary Leader as she is fondly called by her fans in Tamil, installed in 7, Race Course Road, the official residence of the Indian prime minister. It was cut in the presence of the Tamil Nadu chief minister. The party cadre organized a string of charity work across the state  to mark the occasion. “The cake symbolizes Amma would be the next prime minister. We are happy,” gushed a senior party leader Anwar Raja who’s also a candidate.
Releasing the list of AIADMK candidates for the 39 Lok Sabha constituencies from Tamil Nadu and the lone Puducherry seat, Ms Jayalalithaa announced that she would flag off her party’s campaign for the general election on March 3 from the temple town of Kanchipuram. “Our slogan is peace, prosperity and progress,” she told her followers.In the 2009 Lok Sabha polls, the AIADMK had won 9 of the 39 Lok Sabha seats in Tamil Nadu, but she has set her sight higher this time round. She has already forged alliances with the CPM and CPI, which won a seat each five years, and have pockets of influence in and around the industrial towns of Coimbatore and Madurai. Seat-sharing talks with the two Left parties are going on, and the AIADMK would withdraw its candidates from the seats allocated to the two alliance partners.