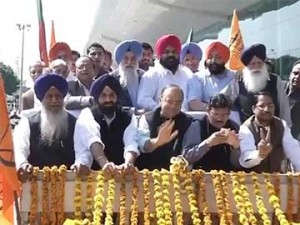 AMRITSAR: Senior BJP leader Arun Jaitley was campaigning today in Amritsar, the constituency from where he will contest his first-ever parliamentary election.There was no sign, however, of Navjot Singh Sidhu, the party’s 50-year-old MP from here, who has evicted to make room for Mr Jaitley. Instead, Mr Sidhu’s wife, Navjot Kaur, a BJP lawmaker from Amritsar East, welcomed Mr Jaitley this morning with party workers.
Re-allocating the Amritsar seat was one of the BJP’s major stress-points last week – Mr Sidhu had reportedly made it clear that he was not happy about being made to surrender the constituency he has represented in the Lok Sabha since 2004. On Saturday, when Mr Jaitley was announced as the candidate from Amritsar, Mr Sidhu said Mr Jaitley was his “guru,” and he would accept whatever the party decided, but made it clear that he would not contest the election from anywhere else.
Two years ago, the BJP and its ally,  the Shiromani Akali Dal, defeated the Congress in the state election.
NDTV’s opinion poll shows the BJP and  the Akalis  winning five of the state’s 13 parliamentary seats.  The Congress is expected to win 8 seats, in a replay of the last national election in 2009.
“I have been in politics for a long time. I am grateful to the party for allowing me to serve the people of Amritsar, and Punjab,” Mr Jaitley, 61, told reporters as he was taken around the city on a truck.