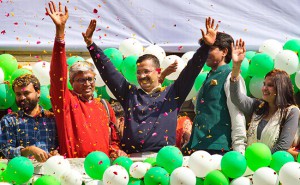 NEW DELHI : Arvind Kejriwal will take oath as Delhi’s chief minister at around noon today at the Ramlila grounds, a sprawling public park which has been prepared for the big event. Everyone is invited.
Arvind Kejriwal has recited poetry in radio ads to invite Delhi’s aam aadmi (common man) for his oath ceremony and organisers are preparing to seat 35,000 people. There is also standing space at the park, which can accommodate about 50,000 people
There will be a VIP enclosure, but AAP sources said it would be used for those invited by the Lieutenant Governor and the Central Government. “Our MLAs will not be using it,” an AAP leader said.
AAP has invited Prime Minister Narendra Modi, members of the Union Cabinet and opposition leaders like Ajay Maken and Kiran Bedi for the ceremony. Manish Sisodia, who is tipped to be deputy chief minister, said many of those people have sent regrets as they have other plans, including the PM.
Around 3,000 security personnel will man security at the venue. The Security Wing will secure the stage where the Lieutenant Governor Najeeb Jung will administer the oath of office to Mr Kejriwal and six others. 50 CCTV cameras and 12 LCD screens have also been added to the venue. A gate behind the stage will be used by Mr Kejriwal and Mr Jung.
Mr Kejriwal is expected to share with Delhi, his government’s priorities after taking oath. He has already asked Chief Secretary DM Spolia to start work on a roadmap to implement AAP’s 70-point election manifesto.
Mr Kejriwal, who has had a fever for the last four days, is expected to leave his residence in Ghaziabad, a Delhi suburb, for the Ramlila grounds at 11 am with Manish Sisodia. But unlike the last time, when he took the metro, the AAP chief is expected to travel by car today to the venue of the swearing-in, accompanied by his family.
From the Ramlila grounds, Mr Kejriwal will visit Rajghat, Mahatma Gandhi’s memorial, before heading to the Delhi Secretariat to officially take charge.
Arvind Kejriwal will chair the Delhi government’s first cabinet meeting at 4.30 pm.
Apart from Mr Kejriwal and Mr Sisodia, AAP leaders Satyendra Jain, Jitendra Tomar, Gopal Rai, Sandeep Kumar and Asim Ahmed Khan will take oath as ministers today. Mr Jain was a minister in the last AAP government. The rest are first-time MLAs.
Mr Kejriwal had resigned as Delhi chief minister at the head of a minority government exactly a year ago after he was unable to push an anti-corruption bill. He had quit after 49 days in office.