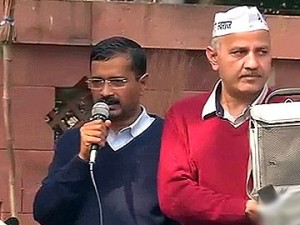 NEW DELHI : Chief Minister Arvind Kejriwal was detained after he defied police orders and urged the capital to join a 10-day protest in the heart of the city and declared defiantly, “Yes, I am an anarchist.” (Chief Minister turns chief protestor in unprecedented face-off: 10 developments)
Mr Kejriwal wants the union Home Ministry to suspend three police officers who refused to make a series of arrests ordered by two of his ministers. The 45-year-old said he will not wait for the results of an enquiry, ordered by the Home Ministry, to determine if the police officers were following the law, as alleged by the police chief, or whether they abdicated responsibility.
“I want everyone to come and join us for this protest,” said Mr Kejriwal, overriding a tweet last night in which he urged the public not to join him in his demonstration because it would interfere with arrangements being made for  Republic Day celebrations on Sunday. “I ask the cops also to take leave and join the protests,” Mr Kejriwal said.
His comments were delivered after he was stopped by the police from heading to the Home Ministry where he planned a sit-in protest against its chief, Sushil Kumar Shinde. “They say I am an anarchist. Yes, I am. Today, I will create anarchy for Mr Shinde,” he said in an aggressive speech delivered after disembarking from his blue Wagon-R at a well-guarded police barricade set up to prevent him from reaching his destination.
But he cautioned people not to target foreigners.
That warning comes after his Law Minister, Somnath Bharti, conducted a self-described midnight “raid” in a South Delhi neighbourhod, where he alleged that Nigerian and Ugandan residents were trafficking drugs and sex. Mr Bharti ordered the police to raid a house and arrest four women. The police refused, saying they had no warrant.
Four women have since filed a police case alleging that they were beaten up by a mob, and forced to go to hospital and submit urine samples. They tested negative for drugs.
In a separate case, another minister Rakhi Birla has accused the police o ignoring her orders to punish a family responsible for a dowry-related death