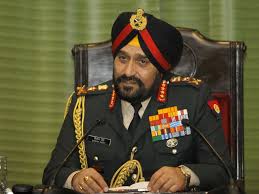 NEW DELHI: Army chief General Bikram Singh will be visiting China next month as part of the stepped-up military engagement and confidence-building measures between the two countries to defuse and manage troop confrontations along the 4,057km line of actual control.
Gen Singh, the second Army chief to visit China after Gen NC Vij in 2005, will hold extensive discussions with top generals of the People’s Liberation Army during his visit slated from 1 to 6 July. India is slated to host the fourth “Hand in Hand” (HiH) counterterrorism exercise between the two armies in November, after the first three were held in Kunming (2007), Belgaum (2008) and Miaoergang (2013). Chinese defence minister General Chang Wanquan is also scheduled to visit India in the near future.
Though the political settlement of the border dispute had remained elusive despite 17 rounds of talks between special representatives, India and China have decided to hold regular meetings between their top operational commanders as an important military CBM.
This includes discussions between the commanders in chief of the Indian Eastern Army Command (EAC) and Chinese Chengdu Military Region (CMR) as well as Northern Army Command (NAC) and Lanzhou Military Region (LMR), as reported by TOI earlier. The two sides are also discussing the implementation of “different practical measures” to make the new border defence cooperation agreement (BDCA), inked during the then PM Manmohan Singh’s visit to Beijing last October, fully operational on the ground.
The steps range from hotlines between formation commanders and additional border personnel meeting (BPM) points to “small platoon-level tactical exercises” and “no-tailing” of each other’s patrols along the LAC.
India had pushed for “greater predictability” in defusing troop face-offs after getting conflicting signals from the Chinese military and diplomatic channels during the “unusual” 21-day face-off in April-May last year when PLA troops intruded 19 km into Depsang valley in DBO sector of eastern Ladakh. With both armies conducting “aggressive patrolling” to lay claim to disputed areas, the BDCA now provides a robust mechanism to de-escalate stand-offs. It holds both armies will “exercise maximum self-restraint” if a face-to-face situation develops, as also have the right to “seek a clarification from the other side” if “a doubtful situation arises” where there is “no common understanding” of the LAC.